It’s my turn to host Tony.J.Forder today TWG as I review his latest novel, ‘If Fear Win’s. Thank you to Sarah from BloodHoundBooks for the blitz invite and the ARC. Here is my review: 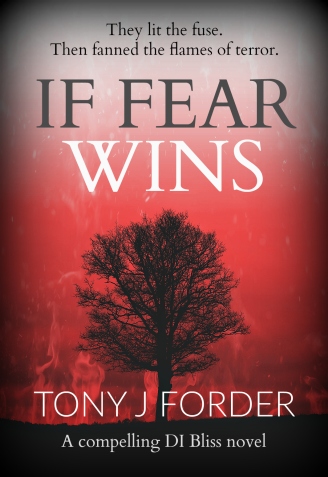 When a torched body is found in a country lane, DI Bliss and Chandler are called in to investigate.

The detectives are drawn towards recent missing person reports, and believe their victim will prove to be one of them. Bliss thinks he knows which, and fears the outcome if he is proven right.

Soon the body is identified, and Bliss and Chandler discover evidence suggesting this murder might be a terrorist attack.

Meanwhile, someone from Bliss’s past needs his help, and soon he is juggling his personal life with the demanding case. To make matters more complicated, MI5 and the Counter-Terrorist Unit are called in to help solve the case. But are they on the right track?

Bliss and Chandler soon find themselves in a race against time, and this might just be their most challenging case yet…

Oh how Detective Bliss makes me laugh! To be honest with you, I probably shouldn’t say that because he deals with a lot of things that us civilians would run away from, but it’s the way he presents himself when dealing with the murders or colleagues he would love to murder himself, that is when I can’t help but laugh.

‘If Fear Wins’ is an incredibly intense read, especially seeing as it starts off with the discovery of a burnt body. Who wanted someone dead so badly that they chose to douse them in petrol and set them alight? What on Earth did the victim do to deserve that? I was flabbergasted by the incident and due to the authors rather descriptive writing, I felt as though I was seeing the burnt body with my own eyes. An image I have struggled to forget, that’s for sure!

Personally, I felt that there was a chunk of storyline in the middle which was incredibly slow to read. Bliss and his team were going round the houses with their investigation, using ‘could be’ scenarios as their way forward. Unfortunately that did make me struggle reading the book at times, because I felt that certain parts dragged on a little bit too much for my liking. That said, the majority of the storyline was very well written and full of oomph, making the slow parts not seem that much of a big deal in the grand scheme of things.

At one point, the MI5 and the Counter Terrorist Unit were involved in the investigation, there was a lot of complex material to try to get my head around. Yes, it was slightly confusing at times but it was so interesting. Tony J Forder could have easily taken on a lot more jargon than he did, yet he wrote the complex and intense scenes in such a way that even I could get the gist of the processes.

Whilst I do admit that ‘If Fear Wins’ had its ups and downs, I can honestly say that I did enjoy the novel, finding myself getting sucked into the investigation quicker than I can say ‘I love books’. Tony J Forder is an excellent story teller, executing his tales with precision, intensity and a lot of suspense.

This book cements my love of police procedurals – so much grit, intrigue, and roller coaster situations, how could I not like it?

Tony J Forder is the author of the critically acclaimed crime thriller series featuring detectives Jimmy Bliss and Penny Chandler. The first two books, Bad to the Bone and The Scent of Guilt, will be joined in the series on 29 May 2018 by If Fear Wins.

Tony’s dark, psychological crime thriller, Degrees of Darkness, featuring ex-detective Frank Rogers, was also published by Bloodhound Books. This was intended to be a stand-alone novel, but Tony is now considering the possibility of a follow-up.

One book that will definitely see a sequel is Scream Blue Murder. This was published in November 2017, and received praise from many, including fellow authors Mason Cross, Matt Hilton and Anita Waller.

Tony lives with his wife in Peterborough, UK.