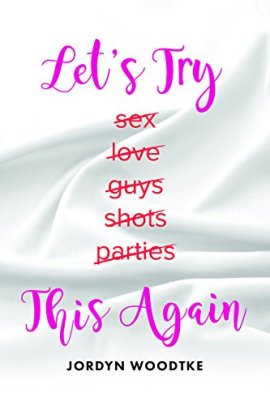 First there is Isaac, the ex-boyfriend who threatens her move to a sunny new life on the west coast when he suddenly comes back into the picture.  The chemistry is intoxicating and Josie starts eating, breathing, and sleeping with him again until the move.  Things are hard enough saying goodbye to her childhood home and very best friends, but when Isaac makes it seem like he might actually want her to stay, Josie wonders if she’s giving up on him too quickly. Josie takes the plunge and moves to California.
Then comes Carter. Sweet, doting – and, oh my god! – former boy band heartthrob, Carter. Josie’s new life falls into place, with new friends and a job working as the personal assistant for Carter as he plans the re-launch of his career. When it seems like there might be something between Josie and her new boss, she can’t help but hold back in fear of crossing a line and, worse yet, getting her heart crushed.  Once again.
What spirals into a complicated, heart wrenching, unexpected love triangle forces Josie to face a decision that she is not sure she can make.  Carter or Isaac.  Or – who knows?
It’s Sex in the City meets Bridget Jones Diary under the Hollywood sign.  A masterful debut novel of love, sex and rock & roll in the New Adult genre.

Sometimes we just need a little relationship drama (not our own obviously), a little bit of sass and a pinch of spiciness to indulge in once in a while, agreed? ‘Let’s Try This Again’ is a modernised version of the infamous UK T.V series, Sex Chips & Rock and Roll. If you have no idea what I’m on about, google/YouTube it!

Don’t get me wrong, some parts of the storyline I found to be a little bit cheesy and over the top, however the majority of the storyline was full of flirty fun and such relatable, girl drama which a lot of females will nod their heads in agreement with. We’ve all been THERE, we have all had THAT dilemma, after all we are only human.

‘Let’s Try This Again’ is a breath of fresh air in terms of overall storyline. Instead of taking the usual (and over used) route in a rom com novel where boy meets girl – they argue over smelly socks – split up – get back together and live happily ever after; Jordyn stands out from the crowd with her new-age rom com approach. Kudos to her for writing a novel that will be remembered for its fun and sass, but more importantly its real life, diverse concept.

All females need this book as a travel companion or a new fangled self-help book to remind us of FUN.

Prizes: Win an ebook copy of Let’s Try This Again. One winner will also get a $25 Amazon GC. (Open Int’l, 30 winners)

About the author.
Jordyn Woodtke is an exceedingly gifted new author who is destined to take the New Adult genre by storm with her debut novel entitled Let’s Try This Again. A graduate of NYU, she majored in screenwriting with a minor in bottomless brunching, skills she took with her when she moved to Los Angeles to follow her dream of becoming a writer.
Jordyn started writing poetry and plays in high school, garnering prestigious awards and accolades from the Hartford Stage, Drexel University, the Waterbury Young Playwrights Festival and the national Scholastic Art & Writing awards, among others.
Now, on any given afternoon you are likely to find Jordyn petting random dogs on her street, noshing at any of the numerous brunch spots in LA, or bingeing Netflix on her couch. She’s grateful and dedicated to the art of storytelling because it lets her say all the things she wished she’d said when she had the chance.
And if Let’s Try This Again is any indicator of future success, Jordyn will get to keep saying them for a long, long time.