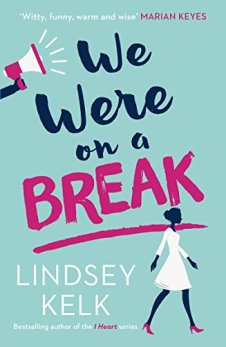 ‘You’ve just had a holiday,’ I pointed out, trying not to yawn. ‘Wasn’t that enough of a break?’
‘I don’t mean that kind of break.’

There’s nothing worse than the last day of holiday. Oh wait, there is. When what should have been a proposal turns into a break, Liv and Adam find themselves on opposite sides of the life they had mapped out.

Friends and family all think they’re crazy; Liv throws herself into work – animals are so much simpler than humans – and Adam tries to get himself out of the hole he’s dug.

But as the short break becomes a chasm, can they find a way back to each other? Most importantly, do they want to?

Please say that I’m not the only one that thought of Friends when I read the title of the book? Good ol’ Ross and Rachel saga has had a 21st century facelift, and has now become the Liv and Adam saga, courtesy of Lindsey Kelk!
Best friend + best friend married to partners brother = straightforward, yes? Ha ha ha, apparently not! Secrets are meant to be kept secret…especially when they’re about…oh I don’t know…a PROPOSAL?!
Don’t get me wrong, I’m not one to talk seeing as I can’t always keep presents that I have bought a secret…from the person that I’m giving them to. BUT! In my defence, I have never blabbed about a proposal. Maybe that’s because I haven’t been told about one. Anyway!

You go on holiday with your partner, aware of the fact a proposal is likely, only to come back from your holiday as the other half of Ross and Rachel. WELCOME HOME! Who does that?! Rhetorical question, you’ll find out for yourself!
I’m sure you’re aware by now that Lindsey’s book is far from being drama free, but oh em GEE, it’s a drama filled, tooty frootie, fantastic book to sink your teeth into! The drama becomes your friend with this book, well, it became mine. One of the main characters found themselves on the naughty step within the first chapter or so. I won’t say which character it was as I don’t want to give too much away. But let me tell you, as their punishment they had to prove themselves to me by the end of the book!

The whole storyline is fantastically written, with bucketful’s of Lindsey Kelk’s trademark humour throughout. Lindsey’s humour turns a humiliating situation, (well several), into situations to be remembered for the right reasons instead of the bad. Even the one liners stand out more than Joey Essex’s tan! If you want to get a good tummy workout, read this book, you’ll forever be doubled over laughing. Absolutely brilliant.

I loved the diversity of the character’s personalities, especially as a couple of them were definitely marmite characters. I do like marmite but I’m still undecided whether they would get my vote or not.

Whilst I was reading the book, I felt as though I was involved in something more than just words on a screen (Kindle). It felt like I was part of somebody’s personal life, enjoying the laughs, and feeling the rollercoaster of emotions slap me in the face. ‘We Were On A Break’ is more than just a 21st century Ross and Rachel saga, it truly showcases Lindsey’s exceptional writing skills and her ability to make her readers feel like her friends.

Even though the chances of a sore tummy and your neighbours thinking that you have turned into a banshee through laughing, are high, the hilarity factor doesn’t undermine the fact that this is such an impressionable story. Instead, the hilarity gives the soul bearing depth of the story a piggy back over to the swings. In simple terms, everything flows, everything works, and everything is absolutely brilliant.

I cannot fault ‘We Were On A Break’ at all, except that it ended, obviously. Lindsey Kelk, I bow down to thee you literary, lipstick, author genius!

I received a complimentary copy of the book in return for my honest views.

We Were On A Break by Lindsey Kelk, published by HarperCollinsUK, will be available for you to get your mitts on from the 6th October 2016!
To pre-order your copy click: HERE HERE HERE