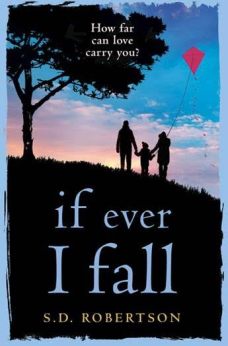 Dan’s life has fallen apart at the seams. He’s lost his house, his job is on the line, and now he’s going to lose his family too. All he’s ever wanted is to keep them together, but is everything beyond repair?

Maria is drowning in grief. She spends her days writing letters that will never be answered. Nights are spent trying to hold terrible memories at bay, to escape the pain that threatens to engulf her.

Jack wakes up confused and alone. He doesn’t know who he is, how he got there, or why he finds himself on a deserted clifftop, but will piecing together the past leave him a broken man?

In the face of real tragedy, can these three people find a way to reconcile their past with a new future? And is love enough to carry them through?

After reading this novel, I felt quite similar to a bag of liquorice all sorts; completely out of sorts. Having read multiple posts on social media in regards to the book being a real tear-jerker, I found myself wondering if I truly was an Ice Queen..

If Ever I Fall is written as though it has three separate personalities, all with their own stories to tell. The storyline switches between those three personalities multiple times, however, it isn’t as straight forward as you might think.
There’s Dan, a man who is very close to losing hope; Maria (his wife) who’s only form of grief release is through letters, and, finally, there is Jack, a….man.

I couldn’t warm to Dan as much as I would have liked as I found his character a little cold. I had my fingers crossed that that would change as the storyline progressed and it did, but only by a little bit. When the storyline changed to Maria and her letters, at first I was a little bit confused as to why she was writing letters and to whom, but sure enough, things became clear and I was quite taken aback by the emotional value those letters and her actions contained. The whole situation caught me off guard, but in a good way as it gave the storyline more of an edge. Very cleverly written.

The third personality we come across in the storyline, is Jack’s, the wildcard of the book in my opinion. As soon as we were introduced to his life I wondered where on Earth did he come from? One minute I was looking at Maria’s letters, and the next I was faced with a man who only knew that he was a man, because he has eyes to see the important ‘clue’. It took me a while to work out where he fit in with the rest of the storyline and what his purpose was, I have to admit.

For me, the storyline went on a rollercoaster ride. It peaked at certain points and it also dipped at certain points too. S.D.Robertson most certainly has a way with words and it is evidently clear by this novel and his previous one, that he has the knack when it comes to enchanting his readers. He comes across, via his storylines, that he understands what it will take to make the reader feel some sort of emotion, whether it be positively or negatively. Even when I found the storyline dipping, the authors writing ‘hugged’ me into the storyline, does that make sense? Let me try to explain; when I came across moments where I felt as though there was a little puzzle piece missing from somewhere; S.D.Robertson  natural and warm storytelling made me feel warm within, enough to continue. In simple terms I was pretty mesmerised by how he wrote the novel to be honest. Really, really beautiful.

That said, for once I didn’t cry yet a lot of people classed this as a tear jerker. Now, before you go all ‘oh em gee’ on me for not crying (believe me, I was shocked myself), my emotions shut down (no, I’m not telling you which part of the storyline that happened!). I became numb and exceptionally cold. Maybe that was because of shock, I don’t know, although it’s highly likely due to the fact my mouth was open and my hand was over it. I wish I could say I loved the entire storyline, but for me, there were multiple parts of the book where a question mark hovered above

Overall, ‘If Ever I Fall’ is a novel which will head straight for your emotions in a way that only YOU know. S.D.Robertson has written a truly lovely book which highlights the true extents of love, grief and hope.

Evan Quinn is serially single, yet when he meets Maddie he feels an instant connection, so much so that he confesses on their first date that he may have testicular cancer. Was it a mistake to be so honest? He wants Maddie more than he has ever wanted any other woman. But he doesn’t want her pity.

With the odds stacked against them both, finding love won’t be easy. But beneath the Australian sun, a Happy Ever After could be worth fighting for.

-hangs head in shame- Helen, please forgive me! You were the very first author to follow me on Twitter, yet this book has been sitting on my Kindle for a couple of months, un-read. Sniff. But, it most certainly was worth the wait!

Maddie has definitely had her fair share of heartbreak and due to a lack of communication, the heartbreak is still as raw now, as it was back then. Her confidence is knocked and she believes that she isn’t worth loving again. But is that because she won’t let herself be loved? Maddie’s future was ‘mapped’ out, she was excited and looking forward to it. Then one day, the rug got pulled from under her, and many others. Lives would never be the same again…

My heart went out to Maddie, it was such a shame to see the burden that she was carrying on her shoulders, still present after all those years. I just wanted to give her a big hug. As soon as Evan came into the picture, his character brought a whole new dimension to the book. Not only was he Australian and rather dashing, (thanks to Helen’s description), he was also such an intense character to get to know.

After reading the first few chapters, the storyline went up a few notches in terms of emotion and intensity, and I wasn’t quite prepared for my reaction to it. By this point in the story, I had gelled with both main characters and felt really involved in their lives as well as the main storyline, so when either of them received news of any sort, I reacted. I was in shock with Evan’s news and I must say, I did get rather miffed with Maddie’s reaction to it (see, I do get involved!!).

I thoroughly enjoyed reading ‘Handle Me With Care’. Whilst the storyline was full of raw emotions and the fear of the unknown, it was also full of hilarious one liners, dry humour and underlined the fact that laughter is the best medicine for some people.

Helen Rolfe has written such an emotional rollercoaster of a story which highlights the importance of self-awareness and self discovery. ‘Handle Me With Care’ is a refreshingly different take on a chick flick that will also have you becoming best buds with Andrex tissue.

‘Handle Me With Care’ by Helen J Rolfe, published by Fabrian Books, is available to buy now from Amazon UK.