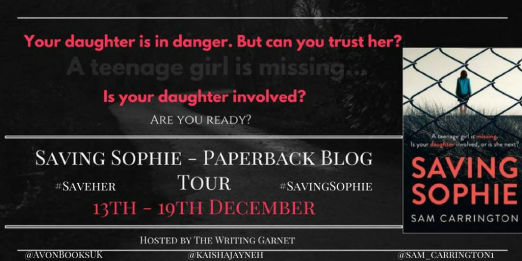 I cannot believe that we are at the end of this blog tour already! This tour was set up to help celebrate the publication of Saving Sophie in PAPERBACK! If you pop into your local Asda, you’ll be able to pick up your very own copy! How brilliant is that!
Seeing as I am actually a tour stop today, please do keep an eye out for another post later with all the thank yous, and so on. For now though, I have a fab guest post from the lady herself, Sam Carrington, AND an extract from Saving Sophie! Enjoy!

My advice for aspiring writers
By Sam Carrington

As a writer, you often get asked for your top writing tips. I’ve compiled the ones I’ve given out so far in one list:

There’s so much advice readily available for writers! I spent a lot of time online searching for tips and ‘How To’ books, and I attended some workshops which were really useful.

I find social media a Godsend. It’s an amazing source of support that I would advise writers to tap in to because writing can feel a lonely process at times, particularly when you’re first starting out.

This can be beneficial as gaining feedback is invaluable. I would say, however, that you might receive a lot of differing advice, so in the end it’s about learning what will work for you and what won’t – I think there’s an element of trial and error here!

*-* DO NOT rush to submit your work to agents.

It’s so exciting to have finished a novel, so much so that it can be hard to hold back! But agents receive so many submission packages you don’t want to give them an easy reason to reject yours. Make sure you read the individual agent’s requirements, have a strong covering letter, a succinct synopsis to the length they ask, and make sure your opening chapters are polished, polished, polished! I DID send my work too early and received a number of rejections quite quickly. Then I was lucky enough to have my work edited by a newly qualified editor and afterwards I began getting requests for my full manuscript. It can be costly, but personally I think it’s worth it.

I entered my opening chapters of Saving Sophie (then titled Portrayal) in to the CWA Debut Dagger award and was longlisted. It was an amazing feeling to have my work recognised. Being placed in a competition validates you as a writer and gives a huge boost to your confidence. Even though my agent was already interested in my writing, I believe that being able to tell her I’d been longlisted was a factor in her decision to sign me.

*-* Learn the art of patience

You’ll need a lot of it (although I’ve yet to master this myself!)

But also know that a dozen people could read your MS and each one of them might suggest a different way to ‘improve’ it. You have to try and be subjective, sit back, think about the comments you’ve been given – if there are similarities, then it’s likely that part of your MS is an issue that needs reworking. But DO NOT change your MS after each and every bit of feedback. You’ll end up in a mess. If you can, get a professional editor, or use a manuscript assessment service. I was lucky to have an editor who had just qualified and was taking on work in order to gain experience. I realise this was great timing – and a lot of people won’t get such good luck. But money spent at this stage could prevent a lot of heartache later down the line when the rejections roll in!

*-* Tell yourself every day that you are a writer.

Act like one, and you will be one! Grit, determination and self-belief are key.

*-* Get organised and make time to write.

Although I’m giving this tip – I am the world’s worst and need to heed my own advice. When people ask ‘So, you write full time then?’ and I answer ‘yes’, I’m sure they think that I do nothing other than sit at my keyboard and hammer out page after page of a novel. But there is so much more to being a writer than that. You might like to visit a blog piece I wrote on fitting everything in: (http://samcarrington.blogspot.co.uk/2016/09/settling-into-life-as-published-author.html) The key, I think, is to have a schedule that fits around your everyday life – and do your best to stick to it!

I have been known to get to 4pm and realise I have only consumed coffee and chocolate bars. Add the sedentary lifestyle of sitting for hours at your desk, and you have a very unhealthy writer! Take regular breaks.

Coming up with around 90,000 words will be far easier if you are enjoying it. Your readers will be able to tell if you are bored, and they will be too. Skip the boring parts.

Above all – ENJOY WRITING AND NEVER GIVE UP!

To wet your appetite for the headfunk that is ‘Saving Sophie’, here is an extract for you to read, as well as the all important book links!

DI Wade slid back the curtain, slowly, as if it could make a difference. Prevent the inevitable for a moment longer, give this couple a few more precious seconds before their lives plunged into the black hole of grief. She’d been here before. Only once during her time as DI, thankfully, but it’d burned a cavity in her consciousness, which had never been fully refilled. She could still see the small body – battered, discoloured, the skin beginning to deteriorate; the image branded on to her retinas. His killer hadn’t been found, the case now a cold one. Lindsay Wade wasn’t prepared to let it happen again.

Standing inches away from Liz Howard, Lindsay could feel her shaking. Not a tremble, but a full-body tremor. Her husband held on to her, to stop her collapsing. A few hours ago, her daughter was merely missing. A terrible thing: the fear of what might be, the not knowing, the constant eyes peeled in the hopes of catching a glimpse. Some people went through it for years, never finding their loved ones. Did it make these parents lucky that their daughter had at least been found? They might gain an element of closure. But then, the next stage: who did this to their beautiful girl? And what if the perpetrator was never brought to justice – what kind of closure was that?

Lindsay placed a hand on Liz’s shoulder. ‘Are you ready?’ The words seemed ridiculous even as she spoke them. How can anyone ever be ready to view a dead body – a body they are expecting to be their child? The woman and man took hold of each other’s hands, took deep breaths, and stepped closer to the window.

Lindsay closed her eyes, not able to watch their pain. She waited for the scream she knew was coming.

A brief, sharp wail emitted from Liz’s open mouth before the man lost his grip and she slumped to the floor. 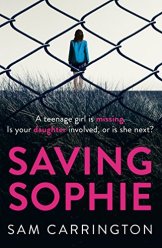 A teenage girl is missing. Is your daughter involved, or is she next?

Your daughter is in danger. But can you trust her?

When Karen Finch’s seventeen-year-old daughter Sophie arrives home after a night out, drunk and accompanied by police officers, no one is smiling the morning after. But Sophie remembers nothing about how she got into such a state.

Twelve hours later, Sophie’s friend Amy has still not returned home. Then the body of a young woman is found.

Karen is sure that Sophie knows more than she is letting on. But Karen has her own demons to fight. She struggles to go beyond her own door without a panic attack.

As she becomes convinced that Sophie is not only involved but also in danger, Karen must confront her own anxieties to stop whoever killed one young girl moving on to another – Sophie.