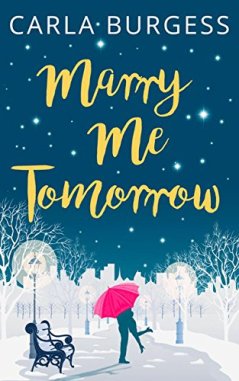 Emily needs a husband…fast. It’s just a few days until Christmas and to finally put a stop to her nagging mother’s matchmaking plans, Emily has convinced her that she’s already married!

And when her excited mum announces that she’s coming to stay, Emily can think of only one man to play the part: gorgeous ex-soldier, Sam. It’s the best part of her day, handing him a coffee every morning – but then, Emily never expected to offer him her hand in marriage, too…

All that’s left is for Sam to say ‘I do’ – it’s the perfect plan! So why then, do her ‘pretend’ feelings for Sam seem far too real?

When I first spotted this book on Carina’s Facebook account I just knew that I had to go and buy it. After all, with a title like ‘Marry Me Tomorrow’, how can anyone let that go by them without reading it?! Far too curious for my own good.

It’s Christmas time and that can only mean one thing: family time! It’s all well and good to see your family over Christmas; just as long as you haven’t told them that you have gotten married….

Oh, wait, it’s only Emily that does that isn’t it? Emily’s mum likes to think she is Cilla Black (may she rest in peace) and set her daughter up on dates; never mind the fact that she might actually be happy single! So, to make life ‘easier’ for herself, COUGH, Emily told her mum that she got married when she actually hadn’t. Where will Emily find a man who will willingly become her ‘husband’ over Christmas? Nothing says ‘marry me’ like a takeaway cup of Nescafe of a morning…

I’ll admit, I surrendered to this book and became its page mistress after reading the first couple of pages! I could NOT put it down. Even though I had an inkling of what Emily was up to, there was still a small part of me that thought she wouldn’t go through with it. If someone came up to me with a cup of coffee and asked me to do them a favour I would politely take the coffee and be miffed that they forgot the sugar! Never mind agreeing to Emily’s ‘genius’ idea (I wouldn’t by the way). Given the fact that I thought Emily’s idea was far from genius, it made me want to keep on reading. The absurdity and bizarreness of her offering made for excellent reading.

As more of the story unfolded I kept giggling because as readers, we were aware of the secret and her mum wasn’t, so ‘watching’ Emily and her beau trying to match their stories was absolutely hilarious. I thoroughly enjoyed the spontaneity of the storyline and all of the characters involved, well, bar one (but you’ll find out for yourself which one I’m on about!).

I haven’t come across a book that was cringy, bizarre and hilarious all at once, until now. One thing has left me quite shocked though; Marry Me Tomorrow is the first novel by debut author Carla Burgess. FIRST! I had absolutely no idea that this book was her first because of the way it was written. The storyline didn’t scream ‘debut’ one bit; instead, it felt as though Carla had been publishing books for a long time.

A fun, bizarre and unexpected read from debut author Carla Burgess. Marry Me Tomorrow ticked all my boxes and some. The perfect pick me up type book that has flown into my top books of 2016. Fantastic book, cannot wait to see what Carla brings out next!

Marry Me Tomorrow by Carla Burgess, published by Carina, is available to buy now from Amazon UK