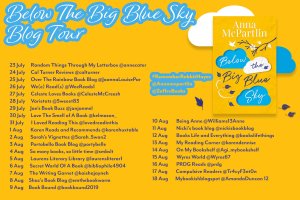 Many thanks to Tracy for inviting me to take part in Anna McPartlin’s blog tour for ‘Below The Big Blue Sky’, and of course thank you to the publisher for the review copy.

How do you pick up the pieces when the person that held them together is gone?
When forty-year-old Rabbit Hayes dies, she leaves behind a family broken by grief. Her mother Molly is distraught and in danger of losing her faith. Her father Jack spends hour upon hour in the family attic, poring over his old diaries, losing himself in the past.
Rabbit’s brother Davey finds himself suddenly guardian to her twelve-year-old daughter Juliet. Juliet might be able to fill a hole in Davey’s heart – but how can he help Juliet through her grief when he can barely cope with his own?
But even though the Hayes family are all fighting their own battles, they are drawn together by their love for Rabbit, and their love for each other. In the years that follow her death they find new ways to celebrate and remember her, to find humour and hope in the face of tragedy, and to live life to its fullest, as Rabbit would have wanted.

Before reading Anna McPartlin’s new book, I had already heard so much about Rabbit Hayes, however i hadn’t read the predecessor to this novel, ‘The Last Days of Rabbit Hayes’. The joys of being on a blog tour for a second book in a series meant that I needed to read the first book first, in order to be able to follow the next installment. I wholeheartedly recommend that you do the same!

I’m never usually lost for words, but i am now! Trying to write a review about a book as emotive as this one, without giving anything away, is proving more difficult than i thought.

The topic of cancer is at the heart of this novel in more ways than one. No doubt those reading this would have been affected by cancer in one form or another, and the devastating aftermath such a bastard of an illness leaves behind, even with survivors.

Anna McPartlin has excelled with her characterisation skills, her adept way of bringing a story to life with such grace, dignity and spellbinding beauty. I was gobsmacked by what my brain was digesting, and what my heart was allowed to devour.

The Hayes family are such a one of a kind, memorable bunch of characters that really make this story, and series, the fantastic read it is.

I was moved by the characters grief, the topic of cancer, and the rawness of such complex emotions. For me, McPartlin has delivered a story which will stand the test of time like never before, and being able to read a book like this, was an honour that I will never, ever forget.