I am over the moon to be kicking off Holly Miller’s blog tour for ‘The Sight Of You’, today with a review. Many thanks to the Hodder and Stoughton team for inviting me to take part in the tour and for the ARC. 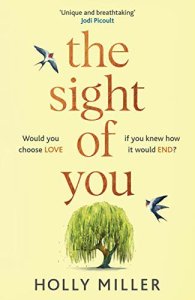 Joel is afraid of the future.
Since he was a child he’s been haunted by dreams about the people he loves. Visions of what’s going to happen – the good and the bad. And the only way to prevent them is to never let anyone close to him again.

Callie can’t let go of the past.
Since her best friend died, Callie’s been lost. She knows she needs to be more spontaneous and live a bigger life. She just doesn’t know how to find a way back to the person who used to have those dreams.

Joel and Callie both need a reason to start living for today.
And though they’re not looking for each other, from the moment they meet it feels like the start of something life-changing.

You may have heard or seen the question ‘if you were reading a book about your life, would you read to the end to find out how your life goes?’. I’ll admit that I didn’t really think too much of that question the first time I saw it….until now that is.

Joel has dreams about the people he loves. Sometimes they are good dreams; a happy event, long awaited happy news. Or they could be bad dreams; the death of a loved one, a disruptive traffic jam, a broken down marriage.

When Joel met Callie, he tried his best not to get too involved in her life. As much as he wanted to keep her at arms length, the friendship that he built with her dog, Murphy, was too much for him to lose. Oh, and he may have had a little crush on Callie too. He was frightened that he would have a bad dream about Callie and that there would be nothing he could do to intervene…..

When Callie said that Joel’s premonitions were a gift, I agreed with her to a point, however I couldn’t help but agree with Joel in the sense that it was as though he had been given a life sentence. He knew things that other people didn’t and if asked, most probably wouldn’t even want to know. I felt for him – how could you live like that? Knowing a loved one was going to die on a certain date and being unable to stop it happening. I did feel a bit frustrated at Joel when he kept on saying how he wanted to tell the people in his dreams that something was going to happen so that it rid him of the emotions that came with it, because hes then giving that person a life sentence. What would be the point in attempting to carry on with your life knowing that you have to fit in everything you’ve ever wanted to do?

On the other side of the coin though, we are having to do that ourselves in our own lives, but because we don’t have a ‘use by’ date so to speak, we think we have all the time in the world to achieve our dreams, when in reality we just don’t. It a difficult one to fathom, and my thoughts change each time I think about it.

‘The Sight Of You’ was a teeny bit confusing at first due to the snippets of messages from Callie, and the switching between character points of view during various stages of their lives. It took me a little while to truly get into the zone of the storyline, yet once I did, as obvious as this is going to sound, things began to make sense and I was able to piece things together and create a picture of what the characters lives may end up looking like.

I was genuinely taken back by the sheer amount of heart, warmth, and emotion that was riddled throughout the storyline. The timelines that were written about certain relationships were so beautiful, so genuine and made for an incredibly tender read.

As soon as it became clear that we were nearing the end of the book, I started to get anxious because, like Joel, I knew I something was going to happen but I couldnt do anything about it. I didnt want the character go – they still had their life to lead. It just wasnt fair. Now I know that this is only fiction and regardless of how I was personally feeling, the inevitable was going to happen anyway, but in a story like this one, it is super hard not to become invested in the lives that were being played out in front of my eyes. The quality of this story needed to be appreciated, and by me investing my own emotion into the book, I felt that I was able to truly to connect with what the author was trying to convey.

‘The Sight Of You’ truly is a one of a kind, memorable and highly emotive read that has made me think of certain things in life that I havent really needed to think about until now. Holly Miller has an exceptional way words – I loved it, i bloody loved it. In fact, I’m just devastated that i cannot give the book more than 5 stars.

The Sight Of You will be published on the 11th June. The book can be pre-ordered now by clicking the link below: