Many thanks to RaRaResources for the tour invite and ARC of ‘Willow’s Wedding Vows’ by Debbie Viggiano – it’s a delight to be a part of the blog tour today. 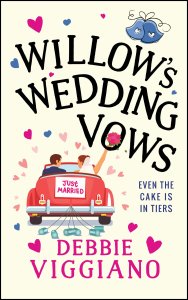 Willow has been living with marriage-shy Charlie for more years than she cares to remember and is old-fashioned enough to want a wedding band and a loads-of-sex honeymoon before stretchmarks and nipple shields.

So when the once-wary Charlie surprisingly goes down on one knee, Willow doesn’t question why her boyfriend is suddenly so keen to rush her into saying “I do”.

The first clue comes as Willow is zipped into her Cinderella dress, the second as she bobs into the wedding car, and the third as the Roller swings towards its fairy-tale destination… leaving a shell-shocked Willow desperately trying to figure out what to do next.

Sorry to be so ruthless right at the very beginning, but WOW, Charlie is such a twat!!! He doesn’t half think that hes gods gift, what with his self inflated ego and all that! I could not stick the bloke! I think I spent most of the story urging Willow to dump his sorry ass!

Obviously the above will only make sense for those who have read the book already and, if you haven’t, please do! I want to know if I’m the only one who thinks hes a turd!

Willow on the other hand, well, aside from being incredibly naive, I did quite like her! I wouldn’t have put her age in her thirties though if I had to guess, she didnt fit that age bracket at all as she came across like such a young minded person.

I, despite my aversion to Charlie, was hooked by this drama filled novel. Seriously, the author kept on giving the drama until the very last second, completely pulling the rug from under my feet whilst causing my jaw to drop the floor. I was NOT expecting the bombshell at all! I didn’t even have a inkling despite it staring me straight in the face!

My only real irk about the book was how there seemed to be quite a bit of padding in and around the vital aspects of the book, which at times didn’t work well with the overall flow. I could spot the parts that were padded out a mile off, and I found it to be a little unnatural which made the storyline judder instead of seamlessly moving from one situation to another.

All in all though, ‘Willow’s Wedding Vows’ was a great read which allowed me to temporarily forget about the current situation. What I loved most was the fact that it was predominantly an easy read which meant that I was able to lose myself in the drama without having to google the definition of words and what not haha. Plus, it was pretty darn funny and wouldnt look out of place in ‘Take a Break’ magazine!