Many thanks to RaRaResources for the tour invite, and thank you to the publisher for the ARC. 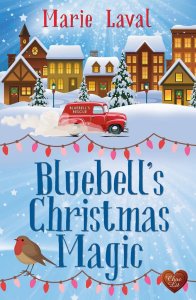 Cassie Bell is used to mess. Her cleaning business, Bluebell Cleaning, is well known in the Cumbrian village of Red Moss. However, now it’s almost Christmas and Cassie has a slightly messier situation to deal with than she’s used to.

She’s been hired to help Stefan Lambert, an injured army helicopter pilot who’s staying at the local Belthorn Manor whilst he recovers. Stefan resents Cassie’s interference and is definitely not looking for Christmas cheer. But Cassie prides herself on sparkling surfaces – so, can she bring some festive sparkle to Stefan’s life too?

To the unromantic eye, Marie Laval’s new book may look like a typically ‘boy meets girl’ read, however there is a lot more to this particular storyline that meets the eye.

Cassie has been hired to help Stefan, a man who is recovering from an accident. Whilst Cassie may be used to picking up other peoples rubbish, or cleaning strangers toilets on a daily basis, Stefan would prefer it if Cassie would mind her own business and leave him to recover in peace. Of course that wasnt going to happen!

Cassie had the personality one could only ever dream about! Not only was she likeable, she also seemed to respect herself by refusing to take anyones rubbish. Pardon the pun.

Stefan was a broken man and it was evident that his scars from the accident would be there a long time, both externally and internally. If only he could meet his own version of Mary Poppins…someone who was practically perfect in every way. I wonder who that could be?

I really enjoyed this high energy, easy to read, cosy novel that was jam packed with mystery, dilemmas, romance, and genuine friendships. The title may lean towards Christmas, however I would quite happily read this book any time of the year! As a huge fan of Marie Laval’s ‘Little Pink Taxi’, I was so excited to dive into ‘Bluebell’s Christmas Magic’, a read that is more than worth its weight in gold, or tinsel!!