Many thanks to Anne Cater and Headline for the blog tour invite and ARC, here is my review of ‘Woman on the Edge’ by Samantha.M.Bailey: 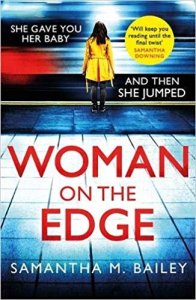 A moment on the platform changes two lives for ever. But nothing is as it seems…

In a split second, Morgan’s life changes for ever. A stranger hands her a baby, then jumps in front of a train.

Morgan has never seen the woman before and she can’t understand what would cause a person to give away her child and take her own life.

When the police question Morgan, she discovers none of the witnesses can corroborate her version of events. And when they learn Morgan longs for a baby of her own, she becomes a suspect.

To prove her innocence, Morgan frantically tries to retrace the last days of the woman’s life. She begins to understand that Nicole Markham believed she and her baby were in danger. Now Morgan might be in danger, too.

Was Nicole a new mother struggling with paranoia?

Or is something much darker going on?

I fluffing loved this!!!

What would you do if a stranger approached you, handed you their baby and then proceeded to jump in front of a moving train? Well, apart from being in severe shock of course! Funnily enough, Morgan didn’t quite know what to do either, yet there she was, standing on the platform with someone else’s baby in her arms.

‘Woman on the Edge’ is a psychological mind funk! We know WHAT happened, yet we dont know WHY. We know WHO the lady on the platform is, yet we dont know the name of the stranger or why they chose to do what they did. Would we ever know the truth? Are we only being told what we want to know?

The plot of this book is a very uncomfortable read and, like many things in life, there is a lot more to the story that meets the eye. Set in the present day as well as a couple of weeks prior, ‘Woman on the Edge’ focuses on the emotional side of being a new parent, as well as highlighting how past decisions have a way of coming back to bite you on the backside if not dealt with properly.

I sped through this novel like a dog on heat! I wanted to find out the truth and attempt to understand what exactly happened on that day on the platform. I wasnt expecting to be taken on a journey where I was left questioning every detail including my own name, however I will definitely take that as a good thing as it shows that the author, and her storyline, got right under my skin.

This is such an addictive, psychologically brilliant, complex and compulsive read that had mu jaw unhinged from the get go. I loved how the author created many suspenseful situations, racking up the intensity as she went. Everything about this book worked and the only thing I can say bad about it, was the fact the darn thing had to end!