Many thanks to Anne Cater for inviting me to take in Michelle Davies’ blog tour for ‘Dead Guilty’, and of course thank you to Panmacmillan for the ARC. Here is my review: 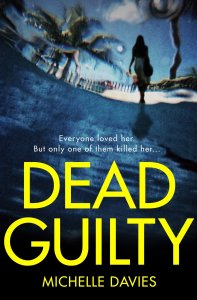 Has the killer in DC Maggie Neville’s cold case returned after a decade of silence?

Katy Pope was seventeen when she was brutally murdered on a family holiday in Majorca. Despite her mother’s high rank in the Met and the joint major investigation between the British and Spanish police, Katy’s killer was never caught.

Ten years later, Katy’s family return to the Spanish island to launch a fresh appeal for information, taking with them the now skeletal team of investigating Met detectives, and newly seconded Maggie as the family liaison officer.

But Maggie’s first international investigation quickly goes from being more than just a press conference when another British girl there on holiday goes missing, and Katy’s killer announces that it’s time for an encore . . .

Having not read the previous three books in the series, I was a bit concerned that I wouldn’t be able to keep up with the storyline due to not having all the backstories of the characters. However, I needn’t have worried – I was able to slot into the series as though I had been following it all along!

‘Dead Guilty’ was absolutely brilliant. The intensity was through the roof, and the honesty of every single character was brought into question multiple times. I loved the uncertainty of not knowing who to trust, and the fact that the ‘whodunnit’ could have been anyone because of them each harbouring some sort of guilt, was so gripping.

Not only did Michelle Davies’ novel focus on a disappearance that was now ten years on, it also tuned into the characters psyches, highlighting the lengths in which people go when grieving or feeling pressured. The psychological element to the story, for me, was outstanding and gave the book such a complex and addictive vibe.

I may have not read the other books in the series, however my bank is about to take a beating as I aim to get those beauties in my hands sooner rather than later.

If you’re after a novel which delivers in both suspense and psychological brilliance, I honestly cannot recommend ‘Dead Guilty’ enough.