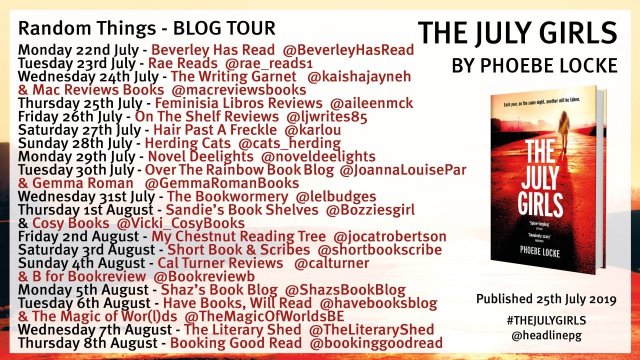 Its TWG’s turn on the blog tour for ‘The July Girls’ by Phoebe Locke, author of ‘The Tall Man’. Huge thanks to Anne Cater and Headline for the blog tour invite and ARC. Here is my review:

Every year, on the same night in July, a woman is taken from the streets of London; snatched by a killer who moves through the city like a ghost.

Addie has a secret. On the morning of her tenth birthday, four bombs were detonated across the capital. That night her dad came home covered in blood. She thought he was hurt in the attacks – but then her sister Jessie found a missing woman’s purse hidden in his room.

Jessie says they mustn’t tell. She says there’s nothing to worry about. But when she takes a job looking after the woman’s baby daughter, Addie starts to realise that her big sister doesn’t always tell her the whole story. And that the secrets they’re keeping may start costing lives . . .

-claps- YASSSSSS!!!!!! What a book!!!!! I couldn’t believe my eyes! Everything I thought was true, wasn’t, and everything I thought was a lie, was the truth. ‘The July Girls’ is brilliant at taking you under its wing very early on in the book. I actually struggled to put the book down, and before I knew it it was 1am and I had a mere 100 pages left to read!

The author, Phoebe Locke, very cleverly honed in on what a magpie does, yet it didn’t seem to hit home until the book nearly came to an end as all of the puzzle pieces leading up to the conclusion weren’t all there yet.

This book follows the life of Addie, Jessie, and a magpie. What do the three of them have in common? That is the big question. I chose to look past what was right in front of me the whole time, over complicating the storyline for myself. Was there a need to do that? Not in the slightest. Don’t overthink ‘The July Girls’ and just go with the flow, you’ll thank me later!!

I loved the chilling vibe to the book, and I thought that everything was combined brilliantly over the course of the books timeline. Honestly, this is a bloody brilliant book and I was hooked. Addie’s naivety gave the storyline a pinch of innocence, whilst also making all of the suspenseful situations all the more darker. The subject of ‘trust’ is prominent throughout the book, and I must say that that definitely made me think about family ties and whether you can trust those you are actually meant to trust because of who they are.

‘The July Girls’ is dark, devious, and darn right gripping. Whilst I enjoyed Phoebe Locke’s previous novel, the author has come up trumps with this book and has delivered an absolute blinder. I want to read it all over again!

‘The July Girls’ will be published in hardcover by Headline on the 25th July. Pre-order now from Amazon UK