Many thanks to Avon for inviting me to take part in the blog tour for ‘Truth or Die’ by Katerina Diamond. If you’ve been wondering about whether to buy the book or not, here is an extract for you all to whet your appetite: 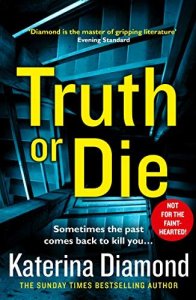 The butchered body of a professor is found in a private office of Exeter University. It is the first in a spate of horrific murders that shakes the city to its core.

Who would target a seemingly innocent man, and why? DS Imogen Grey and DS Adrian Miles turn to his students for answers, but their investigation turns up no leads. Someone must know more than they’re letting on…

As the body count rises, the police have to look into the past to uncover the person responsible before it’s too late.

But are they brave enough to face up to the truth?

At the top of the window he had a couple of tricky manoeuvres to do before he could get over the second ledge onto the small balcony. Once they had been executed, he grabbed the thin ledge and pulled himself up, and then hoisted himself over the wall. One last push before he could get onto the roof. He could go to the side and climb up that way, but it wasn’t as interesting for his followers and so he continued on his path straight upwards.

He climbed up the final window and grabbed hold of the feet of the statue standing at the top of it. He didn’t know who it was of, probably St Peter. Neither history nor religious studies were his subjects at school, so he hadn’t paid attention on the various school trips they had made to the building over the years.

He got his hand around the spike at the centre of the top of the roof and pulled himself up. He didn’t give himself time to rest; he wanted his followers to see the view and so he spun around and looked out over the city. His phone was a tiny blip on the ground from where he was standing, but he waved nonetheless. He would splice the footage together later and put it to music. This was going to look awesome; he couldn’t wait to watch it back.

One thought on “#BlogTour! #Extract from #TruthOrDie by Katerina Diamond (@TheVenomousPen) @AvonBooksUK”