Huge thanks to Bookouture for inviting me to take part in Carla Kovach’s blog tour for ‘The Liar’s House’, and for the ARC. I’m very pleased to be today’s stop on the tour where I have the pleasure of sharing my review: 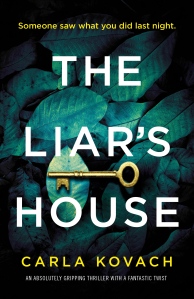 Samantha stumbled out of the party and on to a busy street only ten minutes away from her home. But she never made it home…
Seven years after Samantha’s disappearance, on what would have been her thirty-fifth birthday, her best friend Diane is shocked to find a letter addressed to Samantha on her doorstep.
Opening the envelope, Diane pulls out a birthday card and a finger nail painted in dusky pink nail polish. The same shade Samantha always wore. The same shade she was wearing the night she went missing.
When police analyse the nail, they don’t get the result they expected. Instead of linking them to Samantha, the nail belongs to another woman, Jade Ashmore. And Jade was murdered the night before the envelope was delivered….
What does TWG think?

I do love a DI Gina Harte novel, her character gets more feisty with every new book, yet she seems more human with every new installment. ‘The Liar’s House’ is part of a series and, whilst they will be ok to be read as a stadnalone, I highly recommend reading the books in order so that you’ll have more of an understanding regarding Gina’s past and her issues with Briggs. That woman does not catch a break!

Diane still can’t get over the disappearance of her friend, Samantha, who seemed to disappear into thin air seven years ago. Her gut instinct tells her that her friend is dead, but she remains forever hopeful. It is just a shame that Diane gets caught up in another disappearence…

There are a lot of characters to keep tabs on, some of which will no doubt leave you with a bad taste in your mouth. No pun intended! Whilst Samantha’s disappearance plays a part in the structure of certain events in the book, there are a lot of gritty situations and red herrings which really kept me on my toes.

My gut instinct told me that the ‘whodunnit’ was one character, and I was absolutely convinced that I was right! I was wrong! So very wrong, and yes, because of that, I was extremely shocked as they were right under my nose the entire time!!!!

I raced through Carla Kovach’s new book, demolishing 64% in one go, but thanks to my body being an -insert bad word here-, I had to put the book down! I didn’t want to -stomps foot-. Anyway, Carla Kovach is such an incredible author. ‘The Liar’s House’ was FULL of addictive suspense, rollercoaster moments, psychological uncertainty, and a level of intensity that went through the roof. I loved every minute of this book and I am eager to find out what is next in store of DI Gina Harte and the gang – this is a series that just keeps on getting better and better!!!!