Another children’s book for you all today. Many thanks to a fellow blogger who made me aware of the blog tour, and thank you to the author for the ARC. Here is my review of a puptastic book: 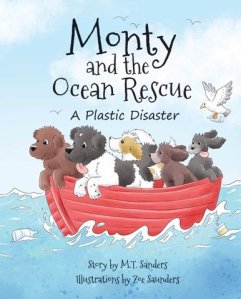 Monty, Cookie and the spangles are back at the beach for the fifth book in this series of childrens books.

When Cookie sees a splash in the water her newfoundland instinct to rescue takes over and she immediately heads out to help. When she returns the dogs get a huge surprise as they hear a desperate plea.

What follows is an adventure that could turn out to be their biggest and most difficult so far.

This is a gentle introduction for children about the issues of plastic pollution in our oceans and even features Sir David Attenborough.

This may look like a cute and fluffy read, but it’s one which packs a punch and a half with it’s very important message; ocean waste.

Now Monty and his friends may end up making you go ‘awwwww!!!!’, I mean, how could you not? But don’t let their cuteness deter you from what the author is trying to teach his little readers.

With rhyming words, snappy sentences, and beautiful illustrations, ‘Monty and the Ocean Rescue’ tells the story of some sea creatures who end up finding themselves stuck due to rubbish being dumped in the ocean. To some people, a little bit of litter here and there isn’t ‘a big deal’. Try telling that to tortoises who end up with straws being stuck up their noses. Try telling that to whales who end up being trapped at the bottom of the ocean thanks to plastic bags or rope. Try telling that to all of the other innocent sea animals whose lives are being cut short because us humans use their homes as our bin.

Imagine if someone came into your home and started dumping their rubbish all around your house – would you like it? Would you deem it to be acceptable? The chances are, no, you would not. So why do we do it to their home?

As adults, we are well aware of the devastation which plastics can cause, so teaching the younger generation is a very important step, once which is explained in a clear manner within this book.

I read this to my little girl yesterday. Shes five and absolutely ADORES dogs. Yes, her attention was on the illustrations and hearing about what the pooches were up to more than anything, yet it certainly caught her attention when she noticed that several of her beloved animal friends were stuck. She didn’t like it at all. She was worried that the whale was hurt and, even though she didn’t quite understand just how the animal may not have survived, she still understood that it was wrong to put rubbish anywhere else except in a bin.

I loved the rhyming words and the ease of which the important information hit home in a child friendly manner. Monty and Cookie were such fun and i think that the author has written such a lovely, lovely read. I highly recommend, especially as my little girl has now said that she wants the other books in the series for her birthday!

Signed copies can be purchased here:

MT Sanders is a writer, blogger and author of the childrens book Monty and the Ocean Rescue.

An accidental career began after he took early retirement and began writing stories on social media about his five dogs. Life according to Monty Dogge soon attracted a huge following and led to invites to blog live from Crufts and other high-profile events.

In 2017 and 2018 Vuelio placed it in the top ten UK pet blogs and the still growing readership encouraged MT to write a book. I’m not a Pandacow was the debut children’s book released in 2017 and this has been quickly followed by four more to date.
MT and Monty spend the major part of their time touring schools across the country bringing the tales to life as children get to meet the star of the books.

The latest book is a real passion project for the author who is a huge supporter of conservation projects and a champion for animal welfare. It goes without saying that MT was delighted to receive a handwritten message of good luck from no other than Sir David Attenborough who features in the book.