Many thanks to HQ for the blog tour invite and ARC. Apologies for the day late blog tour post, but here is my review of Little Darlings by Melanie Golding. 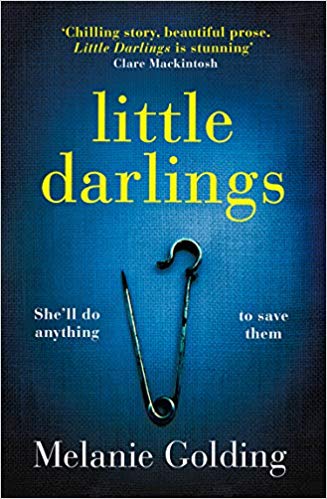 LAUREN IS CRYING.
LAUREN IS EXHAUSTED.

Behind the hospital curtain, someone is waiting . . .

Lauren is alone on the maternity ward with her new-born twins when a terrifying encounter in the middle of the night leaves her convinced someone is trying to steal her children. Lauren, desperate with fear, locks herself and her sons in the bathroom until the police arrive to investigate.

When DS Joanna Harper picks up the list of overnight incidents that have been reported, she expects the usual calls from drunks and wrong numbers. But then a report of an attempted abduction catches her eye. The only thing is that it was flagged as a false alarm just fifteen minutes later.

Harper’s superior officer tells her there’s no case here, but Harper can’t let it go so she visits the hospital anyway. There’s nothing on the CCTV. No one believes this woman was ever there. And yet, Lauren claims that she keeps seeing the woman and that her babies are in danger, and soon Harper is sucked into Lauren’s spiral of fear. But how far will they go to save children who may not even be in danger?

How to review this book without giving too much away…..

Yes, ‘Little Darlings’ is one of those books where reviews need to be thought about even more carefully because of spoiler drops. I’m not saying that my review will contain spoilers, because I will make sure that it won’t. However, please don’t be expecting me to write a review that isn’t at all vague, because this will be!

Giving birth to your own child, or becoming a parent for the very first time via other means, is one of the worlds greatest thing, if not THE worlds greatest thing. However, for some parents, predominately mothers, that time where you are in a fog of love and dirty nappies isn’t quite a happy one. For others, such as Lauren, becoming a new mother can be incredibly confusing and some what….psychologically challenging. But how can we be certain that the goings on in a new mothers head is down to lack of sleep, paranoia, etc, and isn’t simply a case of, oh I don’t know, being the truth?

That question went through my head continuously while I read this book. Is Lauren telling the truth? Is she merely seeing things? Is reality being stilted by lack of sleep, having two babies suck milk out of you as though they’re drinking a McDonald’s milkshake, or because your partner refuses to….man up? Sorry, I hate that term, but Lauren’s husband annoyed me something chronic, so it fits in my opinion.

Obviously when a 999 call is triggered, the emergency services are required to look into it. However, the Police are not required to follow up on something which, according to the system, has been deemed as ‘closed’. I’m not too sure if DS Harper actually saw that on the notes, or whether she pretended not to see it, either way she refused to let the little niggle in her belly get the better of her as she gave Lauren’s case a bit more attention than her boss would have liked.

‘Little Darlings’ has been dubbed ‘chilling’ on social media by fellow bloggers and I can see why! That said, I didn’t find myself as creeped out by the storyline as I thought I would be. I mean, I, like many other people, adore Fairytales, so with the storyline grazing over that theme periodically throughout the book, I found myself becoming so invested in the concept as a whole, I think I blurred the lines between reality and fairytales in my own mind, therefore not finding the storyline creepy because I was looking at both sides of the coin with enthusiasm. If that makes sense.

I thought that ‘Little Darlings’ was very cleverly written and has got suspense down to a fine art. There are a lot of characters in the storyline who, in my opinion, don’t really add much to the book, but I think that’s because I disliked them. That said, the fact that I have an opinion on them full stop, just goes to show that the author did well by including them.

All in all, I flew through ‘Little Darlings’ like a baby bird spreading its wings. It’s dark. It’s intense. And it’s definitely a read which keeps your mind on its toes, so to speak!