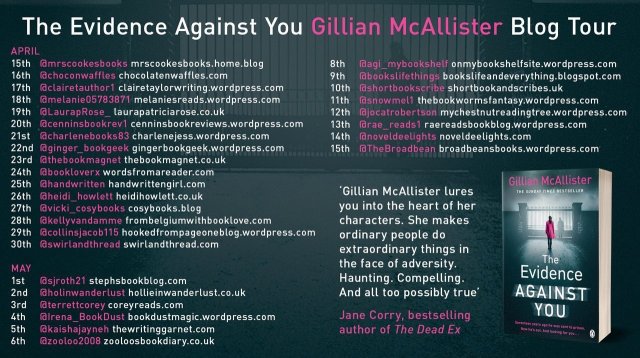 Hugest of thanks to the team at Michael Joseph for the blog tour invite and ARC of Gillian McAllister’s new novel, The Evidence Against You. For my stop on the tour today, I am delighted to be sharing a review: 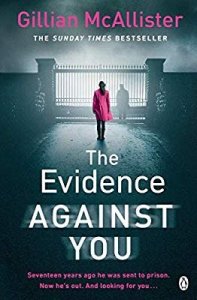 It’s the day Izzy’s father will be released from jail.

She has every reason to feel conflicted – he’s the man who gave her a childhood filled with happy memories.

But he has also just served seventeen years for the murder of her mother.

Now, Izzy’s father sends her a letter. He wants to talk, to defend himself against each piece of evidence from his trial.

But should she give him the benefit of the doubt?

Or is her father guilty as charged, and luring her into a trap?

This is one, psychologically twisted read!

I have to hold my hands up and say that I wasn’t a fan of ‘The Evidence Against You’ at first. I found Izzy’s character to be quite immature and, due to the fact that this particular storyline builds its rapport the more of it you read, I struggled to find the all important hook and keep hold of it.

However, from about the half way mark, my opinion of the book completely changed! The suspense had cranked up several notches, and the constant thought of ‘did he do it, or didn’t he do it?’ just didn’t leave my thoughts.

Basically, Izzy’s dad has been released from prison for murdering her mother, Alex. Gabe says he didn’t do it, yet the evidence and the police say that he clearly did do it. But what does Izzy believe? Shes been left in the dark about the case because she was young when it happened, so the not knowing the ins and outs became her new norm.

With Gabe back in Izzy’s life after nearly 20 years, does she go with the evidence behind his conviction? Or does she give her dad the benefit of the doubt?

What would you do? Tough one really, isn’t it? The evidence was there. The police convicted him. How could he be innocent?

I was really impressed by how the author delivered both sides of the ‘arguement’ so to speak. One minute I was all for the guilty verdict, and then the next I didn’t know what to think. I mean, it was pretty clear that Gabe was digging himself a huge hole.

I thought that the psychological element to the book was outstanding and certainly kept me guessing. Like I said before, the latter half of the book, for me, is where the magic truly happens, and the place where I refused to put the book down until I had finished.

An intriguing, intense read which will have the words, ‘what if?’ balancing on the tip of your tongue until the very end.