Many thanks to BOTBSPublicity for the blog tour invite and ARC, I am delighted to be reviewing ‘Revenge Runs Deep’ by Pat Young, for my stop on the blog tour today. 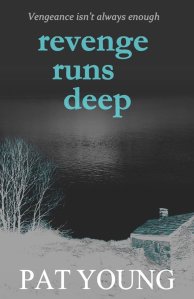 Your boss is a bully. How far would you go to get revenge?
Thomas Smeaton is a powerful man who makes life a living hell for his employees.
When his bullying drives a woman to suicide, three of her colleagues decide it is time to take action before Smeaton destroys any more good people.
Six months later, a car is found submerged in a reservoir, with a single body inside. Suicide? Or murder?
Two people were there the night that car rolled into the depths of Loch Etrin. And one is still missing.

One thing I absolutely CANNOT stand, is bullies. Especially adult bullies. Thomas is a character who made me see red more times than I care to admit. What a despicable human being, although kudos to Pat Young for creating a realistic character which a lot of readers will be talking about.

‘Revenge Runs Deep’ is a book full of exactly that, revenge. But at what cost? I thought that the author wrote such an intense and gripping storyline – I couldn’t tear my eyes away from all of the drama!

This is a storyline that is full of guts and suspense. Despite my anger getting the better of me, I really enjoyed being sucked into Pat Young’s latest read.

Pat Young writes psychological thrillers. Her debut Till the Dust Settles won the Constable Stag Trophy and an Amazon number 1 best-seller award. Her recent release, One Perfect Witness, sat for a while at number 2 in the Scottish Crime charts, nestled between Rankin and Cleeves and ahead of the mighty Val Mc Dermid!

But Pat never intended to be a writer. Then a story got inside her head, demanding to be told. She is fascinated by what happens when someone suddenly disappears and all her books have that theme.
Pat loves meeting readers and has been on the programme at Bloody Scotland and Tidelines. She is really excited about appearing at this year’s Boswell Book Festival at Dumfries House in May where she plans to launch her fourth psychological thriller Revenge Runs Deep

It certainly is as I turn 30 on Monday!! Ever since I was little, birthdays have been a big deal to make up for the 'sorry not bothering, too close to xmas' or 'I forgot' or 'I'm not sending you anything because you dont bother to write to your nan'. People have been telling me that things go downhill from 30, but seeing as I've dealt with a lot of crap, been diagnosed with 9 chronic illness AND I'm a single mum (not that that is a bad thing), I think I've done pretty alright to get this far, dont you think? #thirty #birthday #20011990