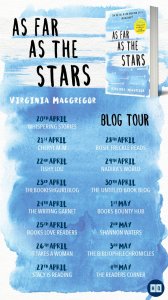 Many thanks to the team at HQStories for the blog tour invite and ARC, I am delighted to be reviewing ‘As Far As The Stars’ by Virginia Macgregor this evening on TWG.

How do you change what’s already written in the stars?

Christopher is the sort of guy that no one notices, yet when Air catches sight of him making intricate paper birds in the airport, she can’t look away.

But their worlds are about to collide in ways they never expected. Someone they love is on Flight 0217 from London Heathrow. And it’s missing.

Convinced that her brother was on a different flight, Air drives them hundreds of miles across the country, on a trip that will change their lives forever.

But how do you tell the person you’re falling for that you might just be the reason their life has fallen apart?

Have you ever sat and pondered about the stars, wondering why some are much brighter than others?

Have you ever sat and questioned your existence, your family relationships, and wonder whether you have ever truly belonged?

Have you ever been faced with a situation you don’t want to believe, knowing full well that, when you finally admit to yourself that it is indeed true, your world is about to come crashing down?

Air has. Christopher has. Up until that faithful day, Air and Christopher were strangers. They didn’t know the other one existed, nor did their paths unknowingly cross. Until that day in the airport. The day both of their lives changed forever…

The main character of this book, Air, is a 17 year old girl whose main aim in life is to go into space. Impressive. Reading a book from the viewpoint of a teenager isn’t something that happens very often. Not the entire book anyway. I was in awe at how in tune the author was with her character, and just how much detail she put into the personality of a young girl. It must be quite hard to channel an inner age, just so a storyline becomes more authentic.

I felt empathy towards Air as I felt that she had the whole world on her shoulders at times. It was a shame that, despite knowing which route to take career wise, her family dynamics were quite fractured and stressful.

‘As Far As The Stars’ has a premise which is highly emotional and one which caught me off guard. I mean, how can anyone deal with the aftermath of a plane missing at sea, hoping their loved ones will reappear as though the event never happened? I would be lying if I said I wasn’t affected by the turn of events, because I was. I thought that the author dealt with the topic incredibly sensitively and realistically and, whilst I found it very emotional, i couldn’t help but be impressed by the way in which it was delivered and incorporated into the overall storyline.

Personally, i found the storyline to be very slow at times, which made it a little difficult to regain my focus when things picked back up again. I thought that the soul searching between Air and Christopher was very powerful, but the storyline itself didn’t flow as seamlessly as I would have hoped.

However, I did enjoy the poignancy of the book and I adored Leda – what a character. An insightful, emotive read with an eye opening premise.