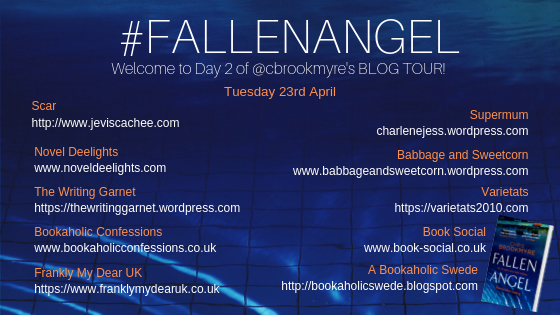 It’s day two of the ‘Fallen Angel’ blog tour! Chris Brookmyre’s novel will be published on the 25th April – congratulations Chris! For my stop on the blog tour today, I have an extract from the book. Many thanks to Little Brown UK for inviting me to take part! Enjoy! 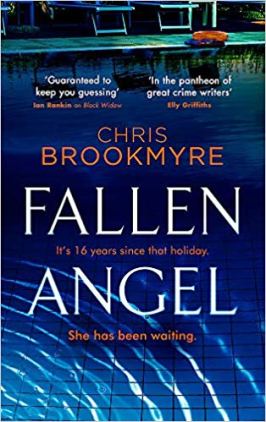 To new nanny Amanda, the Temple family seem to have it all: the former actress; the famous professor; their three successful grown-up children. But like any family, beneath the smiles and hugs there lurks far darker emotions.

Sixteen years earlier, little Niamh Temple died while they were on holiday in Portugal. Now, as Amanda joins the family for a reunion at their seaside villa, she begins to suspect one of them might be hiding something terrible…

And suspicion is a dangerous thing.

She fears that she’s going to be sick. It’s not pleasant, but none­theless, there’s something reassuring about the familiarity of the sensation, and of the moment: getting rid of a problem. Getting rid of a threat.

‘There’s something wrong with you.’

‘Hardly a scoop. You know, they say that when someone tells you who they really are, you should listen.’

L steps aside momentarily as Peter ambles awkwardly past, clutching his clothes. He’s so spooked he walks right out the front door, presumably intending to get dressed in the lobby.

L waits for the door to close before he speaks again.

‘You wanted me to see this.’

‘Brilliant deduction. I guess all the things I’ve heard about your powers of observation are correct.’

There is an easeful coldness to her delivery. It comes readily enough but on this occasion it feels like an act. It puts her at one remove, saves her from truly feeling anything. This is particularly valuable tonight, because what she is feeling frightens her.

She pauses at the end, aware the sentence is incomplete. She stopped herself saying his name, because the only one she’s ever regularly called him by is a term of affection. Right from the off, it was a pet name: an inside joke, his middle initial. L. Lately when she sees it flash up on her phone, she’s become afraid it might stand for something else. That’s why she had to do this.

He doesn’t slam the door. It would be easier if he did. He closes it softly, considerately, like everything else he does.