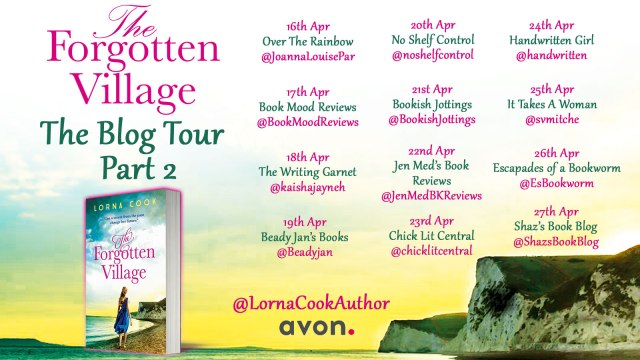 Today is TWG’s turn on ‘The Forgotten Village’ blog tour, and I am super excited to be sharing an extract from Lorna Cook’s novel. Thank you to Avon Books for inviting me to take part in the blog tour. Before that though, here is a little bit more about the book and the all important ‘to buy’ link. Enjoy! 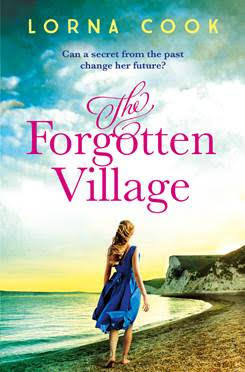 1943: The world is at war, and the villagers of Tyneham are being asked to make one more sacrifice: to give their homes over to the British army. But on the eve of their departure, a terrible act will cause three of them to disappear forever.

2018: Melissa had hoped a break on the coast of Dorset would rekindle her stagnant relationship, but despite the idyllic scenery, it’s pushing her and Liam to the brink. When Melissa discovers a strange photograph of a woman who once lived in the forgotten local village of Tyneham, she becomes determined to find out more about her story. But Tyneham hides a terrible secret, and Melissa’s search for the truth will change her life in ways she never imagined possible.

Melissa looked around briefly as he cast a spell over his audience.
‘The village was requisitioned in its entirety,’ he looked down at his notes briefly, ‘with a promise to be returned during peacetime. Perhaps there should have been a tad more contractual detail about exactly when in peacetime.’ He gave a smile and the crowd laughed enthusiastically. Melissa pressed her lips together, stifling a smile.

‘Tyneham holds a special place in my heart.’ He was sombre now, and the crowd’s mood changed with him. ‘I was brought up only a few miles from here. My grandmother came from Tyneham, and she was here when the announcement came that she, her friends, family, and employers would all have to leave.
I’ve heard first-hand how she felt, but for everyone involved it was different. I’ve always thought the coming together of a community as it was being ripped apart was tragically ironic.

‘But now we get to see the village once again, not as it was, but as it is now. While you can walk the streets, the buildings are damaged by time. Only the church and school are intact and open to the public and I encourage you inside both, to see photographs of the way the village used to be and other exhibits.
But for now, seventy-five years after it was requisitioned, I’m happy to declare Tyneham Village officially open.’

With the sound of clapping once again, he stepped off the stage and a young woman, visibly overjoyed to be part of the proceedings, handed him an enormous pair of ceremonial scissors. He looked taken aback at the sheer size of them and said something to the woman, which made her roar with laughter and flick her hair. He snipped the ribbon and it fluttered to the ground.

At that, the surge started and visitors were shown through by guides in luminous yellow jackets. Melissa watched the crowd head through the gate, but waited for the bottleneck to disperse before she entered the fray. She watched the TV personality as he chatted affably with a handful of visitors. He posed easily with people for photos and signed copies of books, which Melissa assumed he must have written. He smiled throughout and she thought it must be exhausting being a celebrity: the permanent smile and the
demands on you by the public. As soon as one doting fan left Guy Cameron’s side, another appeared. Melissa cast him a final glance before she slipped past him and through the gates, into the forgotten village.

An hour and a half later, a golf buggy whizzed by Melissa and took a turn ahead past the derelict village square. She was rifling inside her bag looking for a non-existent bottle of mineral water to quell the beginnings of a headache. Her head snapped up to see the historian, whose name she had already forgotten, on the buggy, looking incredibly embarrassed as he overtook the tourists. He gave a few of them a little wave of recognition and Melissa laughed, half wondering why he didn’t just go the whole hog and give them a royal wave.