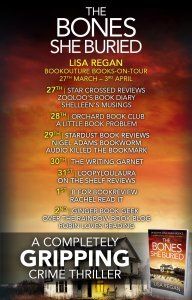 It’s finally TWG’s turn on the blog tour for Lisa Regan’s new novel, ‘The Bones she Buried’. I adore this series and I cannot wait to share my review with you all today. Many thanks to Bookouture for the blog tour invite and ARC. 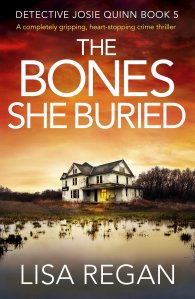 Josie works until her arms ache, until the paramedics arrive and pull her gently away from the woman’s cold, fragile body. Noah’s voice cracks beside her as he calls the time of death for his own, beloved mother.

Arriving with her partner Noah for dinner at his family’s immaculate countryside home, Detective Josie Quinn is devastated to find Noah’s mother, Colette, lying lifeless in the back garden, her mouth clogged with soil.
Searching the house for answers, Josie’s team don’t know what to make of the rosary beads buried in the dirt near the body, or the hidden file labelled “Drew Pratt”, the small town of Denton’s most famous missing person.
As she delves deeper into Pratt’s case, Josie quickly discovers he had a brother whose body mysteriously washed up on the banks of a river. There’s also a diary entry suggesting that Colette may have met him on the last day he was seen alive. Can Josie believe the unthinkable, that a kind old soul like Colette might have been involved in their murders? And, will Josie’s new relationship with Noah survive the accusation?
Josie’s only hope lies in tracking down Pratt’s daughter. But when she arrives at her home to find she’s been murdered just minutes before, Josie knows the real killer is one step ahead and won’t stop until Colette’s secret is buried forever. With many more innocent lives on the line, how deep is Josie prepared dig to reach the truth?

What….on…EARTH!!!!! I was NOT expecting that, AT ALL!! Again, this is where I am so glad that I don’t read blurbs because if I had, I probably wouldn’t have been as shocked by the storyline, personally.

But I was, so right now that’s neither here nor there. Seriously. ‘The Bones she Buried’ may be book number five in the series, but it is an absolute blinder of a book. I swear this series gets better and better each time!!

Josie and Noah are debating over baked goods or, in Josie’s case’ BURNT goods. Let’s just say that baking isn’t her forte but because the couple were about to go for lunch with Noah’s mum, I think that Josie felt as though she had a point to prove.

Unfortunately lunch was no longer on the menu after they discover Noah’s mum deceased in the garden. Did she have an accident, or did someone kill her?

Trying to be Noah’s girlfriend and do her job, really took a toll on Josie and that was evident very early on. Her personality is one which is so used to hiding her emotions under lock and key in favour of being practical first. If you have read the other books in the series, you’ll be well aware that that hasn’t exactly done Josie many favours in the past. With a background like hers though, can you blame her?

As I said above, ‘The Bones she Buried’ is book five in the series abd whilst it does work well as a standalone, I personally think that reading the other four books would be advantageous so that you have more of an understanding to the way Josie works, as well as why she is the way she is. It isn’t a necessity, but as I think the books are brilliant, it’s a win win situation either way.

There is a lot of to-ing and fro-ing in the storyline as Josie’s team try to make sense of the new cases that keep appearing, whilst also keeping up to date with any developments in the cases that are ongoing. Personally, I loved watching all of the puzzle pieces come together over the course of the book, and I thought the delivery in reaching the truth was so intense and a bit like the party game, ‘pass the parcel’. I knew that the truth would be revealed, but the excitement of peeling the layers to reach something which could have shown up at any time, had me on the edge of my seat with such thrill and anticipation.

This is a book which will raise your heartbeat slowly, teasing your mind with little snippets of information which you can’t help but think is important. It is brilliant, twisted, and so very clever, I did not see the outcome coming at all. I had my opinions on who I felt would be in the firing line, yet Lisa Regan completely blew that out of the water and left me thinking, ‘what the f……!!!!!’, and boy I LOVED it!!!!

‘The Bones she Buried’ blew me away. I genuinely don’t think that I would ever get bored of this series or Lisa Regan’s highly addictive, persuasive and mind blowing story telling. This is definitely a book to bump up your reading list!

About the author.
Lisa Regan is an Amazon bestselling crime novelist. She has a Bachelor’s Degree in English and Master of Education Degree from Bloomsburg University. She is a member of Sisters In Crime, Mystery Writers of America and International Thriller Writers. She lives in Philadelphia with her husband and daughter. Find out more at her website: www.lisaregan.com