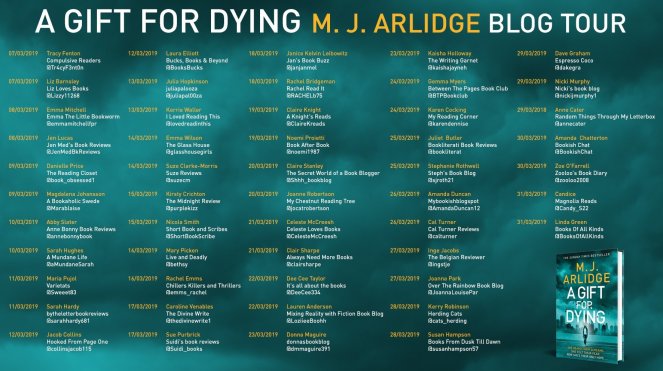 Next up on the blog today is my review of ‘A Gift for Dying’ by M J Arlidge. Huge thanks to Tracy Fenton and Michael J Books for the blog tour invite and ARC. Here is my review: 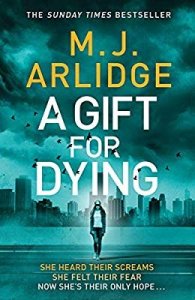 With just one look, she knows how and when you will die . . .

Nothing surprises Adam Brandt anymore. As a forensic psychologist, he’s seen and heard everything.

That is, until he meets Kassie.

Because she claims to have a terrible gift – with one look into your eyes, she can see when and how you will die.

But then a serial killer starts wreaking havoc across the city, and only Kassie seems to know where he’ll strike next.

Against all his intuition, Adam starts to believe her.

He just doesn’t realise how dangerous this trust might be . . .

Holy baloney, I was not expecting THIS!!! I’m not ashamed to admit that my nerves were fried by the end of this book. I mean, some random person claiming that they know when your time is up just by looking into your eyes is enough to make anyone look behind them!

It shouldn’t come as a surprise that when said person with said gift made it known to people what she could see, that they looked at her as though she had two heads. Can you imagine having that sort of ability? Would you call it a gift? I probably wouldn’t but then I’m not entirely sure that I believe in psychics and jazz. Well, I was certain of my belief BEFORE I read this book. Now? I’m not entirely sure whether I disbelieve or whether I’m still caught up in the moment.

This storyline isn’t one for the faint hearted at all, in fact it is incredibly gruesome. As weird as this sounds, the more graphic the story became, the faster my hands turned the pages because I became more hooked. I sound weird now, don’t I?! M J Arlidge held me hostage, just like the characters in the books. Even if I wanted to (which I didnt), I could not put the book down. I just had to find out whether Kassie was right, what would happen to Adam, would the truth about the victims be brought to light. I wanted to know every little detail regarding the jaw dropping situation. I’m not even being over dramatic, the entire storyline left my jaw unhinged in the most gruseomely fabulous way, ever.

I didn’t even see Adam’s situation being the way that it was and yet he was the one trained to see the signs!!

I’m not sure if I have dropped enough hints or not, but if you couldn’t tell already I thought this book was bloody brilliant!!! What a high speed, descriptive and highly addictive read this was! I am absolutely gutted the book finished (wow to that btw too), but it now means I have more books to purchase from M J Arlidge!! What belter!!!