Fifth and final blog tour of the day is for yet another suspenseful read; ‘The Scent of Death’ by Simon Beckett. Many thanks to Hayley Barnes for the blog tour invite and ARC. Please do excuse my late posting – I was fighting with my daughters pet bunny (don’t worry, no bunnies were harmed!!). Here is my review: 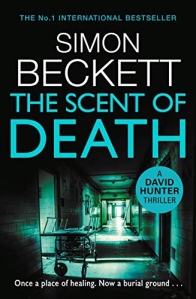 It’s been a good summer for forensics expert Dr David Hunter. His relationship is going well and he’s in demand again as a police consultant. Life is good.

Then a call comes from an old associate: a body has been found, and she’d like Hunter to take a look.

The empty shell of St Jude’s Hospital now stands awaiting demolition, its only visitors society’s outcasts, addicts and dealers. A partially mummified corpse has been discovered in the hospital’s cavernous loft, but not even Hunter can say how long it’s been there. All he knows for sure is that it’s the body of a young woman. And that she was pregnant.

But the collapse of the loft floor reveals another of the hospital’s secrets. A sealed-off chamber, still with beds inside. Some of them occupied…

For Hunter, what began as a straightforward case is about to become a twisted nightmare that threatens everyone around him. And as the investigation springs more surprises, one thing is certain.

My poor bank account! I think I’ve found another series I need to stock up on! I cannot believe I have never read a Simon Beckett novel before. I am pleased to say that, despite ‘The Scent of Death’ being the sixth book in the series, it works well as a stand-alone. Obviously if you wanted to know more about the history of the characters, reading previous books would be advantageous I assume….seeing as I haven’t done that. Sniff.

If it were anything other than fiction, dead bodies wouldn’t really be something I would lean towards, however when Simon Beckett makes his readers aware of a dead body or two at the very beginning, I was gripped right there and then.

I thought that the storyline was very well thought out and clearly meticulous planned, especially as there was a lot going on and a lot of events seemed to interlink with each other. The main character, David Hunter, is a tough personality to gauge. He is admirable what with his job and what not, but there were several kinks in his personality which left me a little bit unsure about him overall. Not complaining though!

‘The Scent of Death’ is definitely a story which takes the readers on a journey. I loved witnessing things from David Hunter’s point of view as and when he found them, as it added to the suspense and kept my attention focused on the storyline for the duration.

I am gutted that I didn’t find this series sooner, but I cannot wait to binge read from book one. Simon Beckett is such a captivating storyteller who delivers grit and intensity in a way which makes my toes tingle – an author who is now high on my radar!

Dunno what on earth possessed me to colour in the entire @buildabear box for one of Eva's birthday present, but I have to say I'm really pleased with it!