Seeing as I screwed up my blog tour dates, I am delighted to post my review of ‘Gallowstree Lane’ on my blog tour. Apologies to the author, Corvus Books and RandomThingsTours for my genuine error. 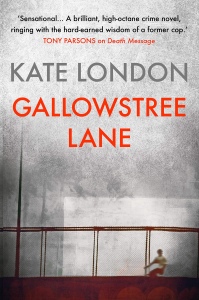 Please don’t let me die. Please don’t. The final words of teenager Spencer Cardoso as he bleeds out on a London street, his life cut short in a single moment of rage.

When a teenage boy steps out of the shadows of GallowstreeLane and asks a passer-by for help, it’s already too late. His life is bleeding out on the London street.

The murder threatens to derail Operation Perseus, a cover police investigation into the Eardsley Bluds, an organised criminal network. Detective Kieran Shaw can’t and won’t allow that to happen. But fifteen-year-old Ryan has other ideas. He’s witnessed the death of his best friend, and now he wants someone to pay…

As loyalties collide, a chain of events is triggered that threatens everyone with a connection to Gallowstree Lane.

I have been wanting to read a Kate London novel for AGES! ‘Gallowstree Lane’ is the third book in series, so do bear that in mind before you read it as, in my opinion, it would be beneficial to read the previous two books first. I didn’t and I found that I missed out on information regarding the characters, which would have come in useful had I already known it. That said, others may find it perfectly fine to read without the background information of previous books.

‘Gallowstree Lane’ is very ‘in’ with the times so to speak. The main theme of the book is gangs and crime on the London scene. It’s one thing reading about stabbings and such in the media, but it’s another thing being in amongst the criminal activity yourself, even on a fictional basis. Kate London clearly has experience in that environment as her descriptions were too intricately written for someone not in the know! I loved the intense storyline and in depth detail where the crimes were concerned – even if it was quite unsettling at times!!

I wouldn’t say that ‘Gallowstree Lane’ is speedy read, because it isn’t. It’s one of those reads which has the storyline stewing for a little while, sparks as the story progressed, and then explodes when you are least expecting it.

Overall I was rather impressed by Kate London’s engaging and addictive writing style, and I look forward to re-reading this book once I have read the previous books in the series.