Finally! It’s my turn on the blog tour for Roxie Cooper and her phenomenal new book, ‘The Day We Met’. Many thanks to Tess Henderson for the ARC, and thanks to Anne for the blog tour invite. Here is my review: 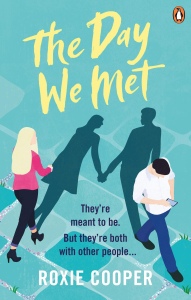 Stephanie doesn’t believe in fate, true love or living happily ever after. She’s content enough being engaged to Matt. But then she meets Jamie, who understands her more than anyone else ever has.

Jamie is happily married to his childhood sweetheart Helen and believes in everything Stephanie doesn’t. So why does he have such a strong connection with Stephanie?

Stop everything, unplug the phones, grab all of the tissues from your local supermarket, and get ready to go on the journey of a lifetime. Hell, I don’t even know how much you can prepare yourself for this book because I thought I was mentally prepared, but I was far from it.

Steph and Jamie meet each other by chance, and end up with a connection even BT would be proud of. So what is the problem? Well, the two characters may have found themselves getting on very well with each other, and they may understand each other on all sorts of levels, but the thing is – there can’t be no ‘thing’ between them as one is married and one is engaged.

Steph thought she had everything. She thought she was with a man who understood her little quirks, accepted her flaws, and loved her for who she was. And Jamie, he really had really found the love of his life. The yin to his yang. Hence why he married her, so why was he willing to risk everything for a stranger?

Without divulging too much, ‘The Day We Met’ is a very unique, yet very realistic portrayal of romance and the ups and downs of relationships. Roxie Cooper has created characters which are flawed, and have deep routed issues. She has also created characters who are sure of themselves and have their own five year plan, planned to perfection. The beauty of the contrasting characters in this book is that they work so well together and make the storyline come alive absolutely brilliantly.

Now, I was lucky enough to read this book last year and I am not ashamed to admit that I ugly cried to the point my body felt as though it had run out of water. I’m not even being dramatic as I instagrammed the fetching picture!

As the storyline progresses, the author drops hints about what lay ahead. If you’re anything like me, you would ignore those hints and pretend that the author has no idea what she is talking about. Yes, I refused to accept the possibility of an event. And yes, it did come back to bite me on the booty but only because I had fallen head over heels in love with both of the main characters and their journeys. I wanted them to celebrate, to be happy in each of their newfound situations, but life isn’t like that, is it?

I was utterly devastated by the turn of events later on in the story, but I couldn’t help but but be mesmerised by the beauty of how everything came together.

Yes, ‘One Day We Met’ is extremely emotional, but it is, beyond belief, the most beautifully written, heart wrenching, touching, and poignant novel I have ever read.

Roxie Cooper has written a movie worthy, highly enchanting, wonderfully crafted novel which has taken my heart hostage forever. Such a phenomenal, phenomenal read – I loved it!