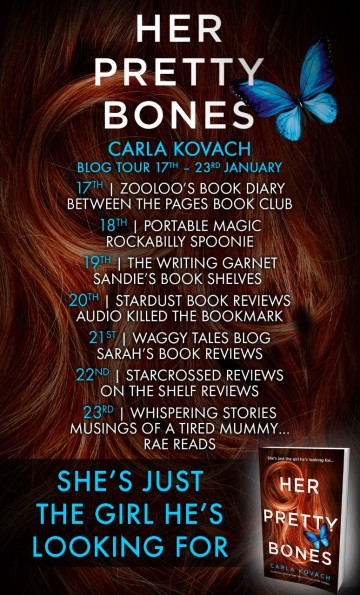 Eeek!!!! It’s TWG’s turn on the ‘Her Pretty Bones’ blog tour, and I am absolutely thrilled to be sharing my review of Carla Kovach’s latest release with you all. Many thanks to Bookouture for the blog tour invite and ARC. Here is my review: 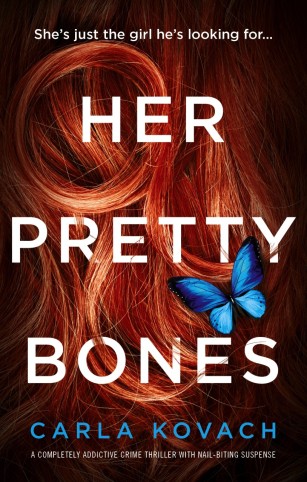 A young woman falls from a van speeding down a quiet road. Battered and bruised, she turns her head to the person who comes to her aid. ‘Help her’, she whispers before her eyes close.

Days later, the body of another young girl is found in a shallow grave just a few miles away. The similarities between the two girls are startling – same age, same frail body, same shocking red hair.

As the town fears there’s a serial killer living amongst them, Detective Gina Harte must put aside her own struggles at home, and catch the killer before he finds another perfect girl.

DI Gina Harte is back, ladies and gentleman!! One of my all-time favourite detectives with her fiery personality and fierce determination to get results. Plus, she also wears her heart on her sleeve which, as she has found out on more than one occasion, it’s something she shouldn’t really make public knowledge incase anyone abuses it. Surely a detective in the police force shouldn’t be admitting they have a heart….right?

‘Her Pretty Bones’ is a firecracker of a read, with a prologue guaranteed to set your pulse racing before anything has really begun. How did the young girl fall from a van? Why was she in there to begin with? Who is she? DI Harte has her work cut out trying to find the answers to such simple yet in this instance, very complex, questions. Of course, hindsight is a wonderful thing and as the storyline progresses, it soon becomes clear that DI Harte wishes she only had the question of ‘who is she?’ to answer, and not everything else.

I certainly did find this book to be a rollercoaster ride of a read as there were moments where the storyline calmed down a little, then went off on a tangent at rocket speed the next. I didn’t find the pace constantly speedy as they were some slow parts (in no way a negative at all as it worked), but it was certainly bumpy which really heightened the urge to know more.

The storyline switches between different points of view which I thought was very cleverly done as I had absolutely no idea who the other point of view was, nor did I have any idea as to how they played a part in the book. Well, I did to a point, but I couldn’t connect the dots…if that makes sense? It’s safe to say that I was hooked on every single event the storyline had to offer, even if they were a tad disturbing!!

Carla Kovach is a genius at creating intense and spine tingling moments in her storylines, leaving me reeling by every eventuality! I love how the author doesn’t just write characters to fill a space, she creates characters who she knows will add another dimension to an already complex storyline, even if its only for one chapter.

‘Her Pretty Bones’ left my pulse racing and my brain on high alert – it seemed to take ages for my breathing to regulate once I had finished the book. I could NOT have seen the conclusion coming if I tried and wow, what a brilliantly written lead up to a firework of an ending.

Chilling, complex, and off the Richter scale in intensity, ‘Her Pretty Bones’ is a beautiful book to look at and a phenomenal one to read. What a series!!!! More please?!

Carla Kovach was born in Birmingham, UK and now resides in Redditch, Worcestershire. Author of supernatural drama ‘Flame,’ psychological thriller ‘To Let,’ crime thriller ‘Whispers Beneath the Pines,’ and holiday comedy, ‘Meet Me at Marmaris Castle.’ Carla also writes stage and screenplays, some of which have been produced in the Worcestershire area. Her feature film ‘Penny for the Guy’ is being made and is set for release in 2019.

Her latest book, Her Final Hour, has been published by Bookouture. It is the second in the DI Gina Harte crime series.