Third and final blog tour for today! It’s day two of the ‘Wicked Game’ blog tour, and I have a review of the book to share with you all today. Many thanks to RaRaResources for the blog tour invite and ARC. Here is my review: 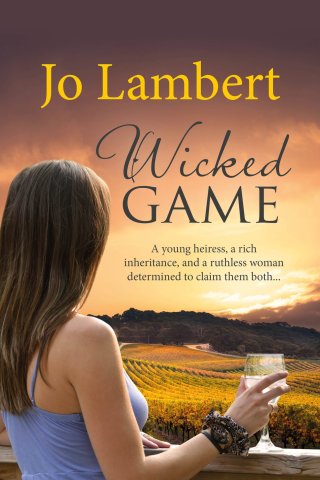 Fashion designer Thérèse D’Alesandro has recently moved into Westhead Manor with daughter Felicia and stepson Marco. Joining forces with neighbour Ella Benedict, she is about to open a bridal boutique at Ella’s exclusive wedding venue Lawns at Little Court.
Managing his father’s European restaurant chain, Marco has both the looks and charm to guarantee him any woman. Any woman, that is, except the one he wants: Ella’s niece Charlotte. Marco knows he should walk away as not only is she the most exasperating female he has ever encountered she’s currently in a relationship with rock star Christian Rosetti. But the chemistry between them is undeniable and sensing trouble brewing between Charlotte and the egotistical singer he is prepared to wait.

Charlotte’s cousin Lucy has discovered Christian’s guilty secrets – ones he has been keeping safely hidden from everyone. Determined to cause mischief and at the same time settle her own score with the arrogant star, she sets in motion a chain of events which eventually brings Marco and Charlotte together.

Thérèse’s husband Gianlucca has invited the granddaughter of an old friend to stay as a house guest while he undergoes heart surgery. Rossana Caravello is due to inherit the one of Italy’s premier vineyards on her twenty first birthday in September. Aware this would make an excellent addition to her husband’s international business portfolio, Thérèse plots to push the young heiress and her stepson together. Rossana is already besotted with Marco, but if the plan is to have any chance of success first she needs to get rid of Charlotte…

Please note Wicked Game was previously published under the title The Other Side of Morning.

‘Wicked’ is a slight understatement for the goings on in this book, that’s for sure!! I don’t think I have come across such a vindictive group of characters before! Sorry, I’m not tarring them all with the same brush, just a few of them were borderline nasty! Geez!!!

I am impressed at the author’s ability to guarantee a reaction from her readers, I mean, I would be extremely surprised if anyone reading this ended up unfazed by the events in ‘Wicked Game’! I think I surprised myself by my own reaction to be honest!

‘Wicked Game’ has quite a lot of characters to keep tabs of, and there is a LOT of drama filling up every inch of the storyline. I did enjoy the overall, bigger picture of the story, most definitely. I thought that a couple of the characters, for example Charlotte, Matt and Lucy, were brilliantly thought out and I really enjoyed following their journeys as the story progressed. However, I did feel as though there was way too much sabotaging going on from all angles. Thérèse was the most vindictive in my opinion, and she just didn’t seem to give it a rest, even when Marco and his father stood up to her. She just wasn’t getting the hint. As for Marco, I couldn’t understand why he still put his belief in that awful woman, despite being reassured from the most important person in question. It was as though he was sabotaging himself sometimes!

I do like drama, and I do like grit. Who doesn’t, right? Personally this was too much for me and I just wanted to shout, ‘WILL YOU ALL BLOODY TALK TO EACH OTHER!!!’, loudly at the book! That’s really all it would have taken! I mean no disrespect at all as I clearly was invested in the characters and the story to form an opinion as detailed as this one. It was also very clear that the author is brilliant at writing detailed pieces and making them flow seamlessly, because that is what happened here.

I do think that Lucy was the hidden gem of the book and, whilst I didn’t dislike Charlotte at all, I felt that the conclusion, on her part, ended up making her appear weak and was far too easy. But that’s just me, maybe it’s because I am incredibly hard-nosed – who knows?!

I didn’t dislike ‘Wicked Game’ at all, I did enjoy the grit and I thoroughly enjoyed the way the author crafted her storyline with all of the intricate details – I just think that the storyline was fit to burst!

Win £15 Amazon Voucher (UK Only)
*Terms and Conditions –UK entries welcome.  Please enter using the Rafflecopter box
below.  The winner will be selected at random via Rafflecopter from all valid entries and
will be notified by Twitter and/or email. If no response is received within 7 days then I
reserve the right to select an alternative winner. Open to all entrants aged 18 or over.
Any personal data given as part of the competition entry is used for this purpose only
and will not be shared with third parties, with the exception of the winners’ information.
This will passed to the giveaway organiser and used only for fulfilment of the prize, after
which time I will delete the data.  I am not responsible for despatch or delivery of the
prize.

Jo Lambert lives on the eastern edge of Bath with her husband, one small grey feline called Mollie and a green MGB GT. She is the author of seven novels. The first five collectively known as the Little Court Series are saga/romances set in West Somerset. For book number six she ‘moved’ over the border into South Devon. Summer Moved On became the first of two linked contemporary romances. The second, Watercolours in the Rain was published in October 2016. In June 2018 Jo signed to Choc Lit and her eighth novel, The Boys of Summer, set in North Cornwall will be published in 2019 under their Ruby imprint. Jo is currently working on another coastal romance, this time set in South Cornwall. When she isn’t writing she reads and reviews. She also has an active blog. Jo loves travel, red wine and rock music and she often takes the odd photograph or two.