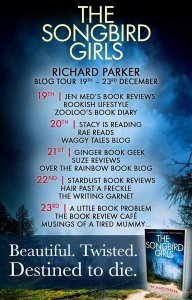 I am super excited to be sharing my review of ‘The Songbird Girls’ by Richard Parker. Many thanks to Bookouture for the blog tour invite and ARC. Here is my review: 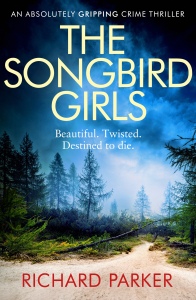 Her eyes were closed. From a distance the blood around her neck might have looked like a necklace, but up close her body told a different tale. She had been murdered. A tiny songbird lay beside her, its neck broken…

Detective Tom Fabian’s past is catching up with him. It has been years since the most high-profile case of his career – when his evidence put infamous serial killer Christopher Wisher behind bars forever. But when Wisher summons a reluctant Fabian to his prison cell to hand over a diary, he realises that Wisher’s twisted games are far from over.

Shortly after Fabian’s visit, Wisher is found dead in his cell. And a few days later, the police find a woman’s body bearing Wisher’s signature, a dead songbird. But the police never released this detail to the public… so who has Wisher been talking to?

Fabian is desperate to find the killer before another innocent life is taken. But as more bodies turn up, Fabian begins to realise that Wisher may have handed him the clues before he died. Is the twisted serial killer still pulling the strings from beyond the grave…?

It feels as though it’s been ages since I’ve sat down and lost myself in a Richard Parker novel! ‘The Songbird Girls’ did not disappoint at all, and I am so pleased to see the author sticking to his guns when it comes to his twisted mind in this storyline. Twisted his mind may be, but bloomin’ ‘eck he can write!!

‘The Songbird Girls’ starts off slowly as it eases readers into a false sense of security with what’s about to come – it was as though one moment we were reading about Fabian having a natter with an inmate, and then the next minute everything had kicked off. I loved the slow, teasing beginning of the book as it ensured that the shocking scenes later on in the book were indeed that; shocking.

Richard Parker has written a brilliantly intense and clever storyline which kept me guessing. Fabian sometimes came across as a bit of a marmite character, but given the nature of this particular storyline, I felt that he had every write to be a bit cautious in the way he presented himself.

I loved how each individual event was cleverly linked to the one that followed – I can’t even begin to think about how much working out that must have taken to ensure the timeline was bang on.

As for the rest of the characters, there were a few which had me rolling my eyes in despair, yet they all added something vital to the overall vibe of the story which I thought was very important, especially as their likability factor doesn’t really need to come into it.

All in all, I thoroughly enjoyed ‘The Songbird Girls’ from the dark moments to the psychologically damaging aspects, and everything in between. Such an intense and twisted read which I most definitely recommend.