On the 11th day of Christmas TWG gave to me, a review of ‘Part Time Working Mummy’! I am so pleased to be involved in the #12DaysofChristmas blog tour – many thanks to Tracy Fenton for the tour invite, and thank you to Trapeze Books for the review copy. Here is my review: 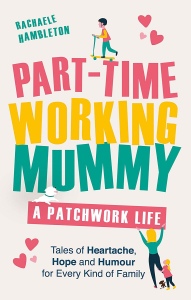 Want to know the truth about what life is like as a mum and step-mum with a chaotic patchwork family?

This book is everything I’ve been through that’s made me who I am, plus the lessons I’ve learned from many mistakes. I hope that it will make you laugh as well as give you strength to keep going when times get tough. After all, we are all in this together…
Rachaele, aka Part-Time Working Mummy

Hundreds of thousands of fans flock to the PTWM page online and now, in this book, Rachaele shares her behind-the-scenes experiences with single parenthood, unexpected pregnancy, domestic violence, relationships, bullying and much more – spreading kindness amidst the crazinessalong the way!

Some of you may have already heard of ‘Part time Working Mummy’ AKA Rachael’s Hambleton, especially if you follow her life on Facebook and other social media. For those who aren’t aware, Rachaele is an avid supporter for mental health and domestic abuse charities, as well as being an extremely popular parent blogger and mum/wife/step-mum. Her honest approach to life as a parent has given her just under 500,000 followers on Facebook. How amazing is that?

Now, I’m sure that there are people out there who are probably wondering ‘what makes her so special?’. Not a negative thing to ask after all, we are inquisitive human beings. My answer to that is this: the fact that she owns her bad choices and realises that several of her decisions in the past have been monumental eff ups, whilst also being a domestic abuse warrior, mental health advocate, massive supporter of multiple charities linked to the above, a mum to three daughters and a step-mum to two boys, makes me think ‘okay, this lady has balls of steel and a story to tell which a lot of us could learn from’.

Hence her blog and now her book. When I fell pregnant, all I saw on social media was how perfect the mum life was, as though getting covered in baby shit wasn’t the norm…when it is. PTWM (Part time Working mummy) isn’t saying that being a mum can’t be perfect because it can be your own sense of perfect. However, what she is saying is that becoming a parent is something which needs to be approached with eyes open and no rose tinted glasses. As mums (and dads), we often feel like we can conquer the world one nappy at a time whilst also balancing a cup of tea on our arses as we do the downward dog yoga pose – when in reality we can’t. After all, who wants a burnt foof?

PTWM highlights the hurdles she jumped over, face planted into, and barely made as she became a mum for the first, second and third time, whilst also dealing with horrific domestic abuse and body issues. So yes, even though I laughed my backside off reading this book, a lot of PTWM’s experiences hit home because she doesn’t mollycoddle it or pretend it never happened. Instead she says it how it happened, admits her faults and tries to put several taboo situations in the spotlight to gain the awareness and support it so desperately needs.

I’m going to talk personally a second – I was a victim of domestic abuse, and for 10 years of my early life I was the child who witnessed the devastation of domestic abuse and alcoholism first hand. It really is something you think only happens to ‘other people’ when it happens to you, and being a child and hearing your mum screaming due to the abuse, and being the one to creep downstairs to wipe the tears from your mums eyes at the age of 6 – it stays with you. Okay, like PTWM says on more than one occasion in the book, people automatically wonder why the victim doesn’t leave and, even though it is far too easy for us to sit there and judge a situation we aren’t in ourselves as every situation is different, the reality is a tough pill to swallow.

PTWM, in my eyes, is exceptionally brave to be to open and honest about her past. I’m not saying that she should be ashamed of it because she shouldn’t, but again, like she said herself in her book, putting yourself out there is daunting because there will always be people who will be nasty heffers, even towards the most broken of people.

As well as talking about her past, PTWM explores the hurdles of becoming a patchwork family and just how stressful being a ‘step’ parent can be. Social media can make things look a lot easier than they seem, and I think it’s brilliant that PTWM has decided to share the lows along with the high by being realistic and certainly relatable.

I am in awe of just how much PTWM does for other people, whether they are a parent or not. I will admit that, at times, I did wonder how her experiences made her more clued up on things than other people, and that was wrong of me to think that because she doesn’t once say that she’s perfect in this book. She says that she is human and that she makes mistakes. She says that her life has been extremely difficult and that she was at breaking point, yet she also states how being a mum is the most rewarding thing she has ever done. So it’s not the case of PTWM trying to show that she’s ‘better than everyone else’ because it’s very clear that she still suffers with effects of her past. Instead it’s a case of being open and honest about heart wrenching situations, in the hope that one person may find the strength in her words to walk through the tunnel in their own lives. Nobody can really fault the PTWM for that now, can they?

PTWM – A Patchwork life, is an inspirational, raw and extremely poignant memoir that is guaranteed to make you react in multiple ways. I am in awe at Rachaele and everything she has come through, and I think the way she has put pen to paper by putting her story on the table, was incredible and extremely brave. When I grow up I’ve decided I want to be like PTWM ;).

Rachaele Hambleton, aka Part-Time Working Mummy, is one of the most popular personalities in the parenting blogosphere. She is a full time mum to three daughters, step-mum to two boys and is recently married to her ‘bird-boy’ Josh. Her successful blog documents the highs and lows of life as a family of seven… with two dogs and two guinea pigs thrown in for good measure. As well as blogging and bringing up 5 tiny humans, Rachaele fights hard for awareness and funds for domestic abuse and other charities.