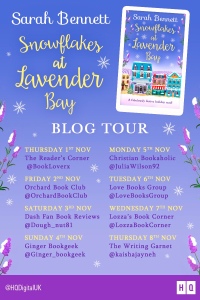 Happy publication day, Sarah Bennett! I have the honour of hosting the final stop on the blog tour. Many thanks to HQDigitalUK for the blog tour invite and ARC. Here is my review: 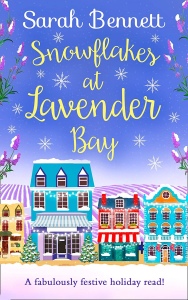 The most wonderful time of the year…

Libby Stone has lived in Lavender Bay all her life. She loves the little seaside town and has big dreams to turn her father’s greasy old chippy into a dainty teashop – not that she’s told him yet!

Finding love isn’t easy amongst the cluster of coastal houses, but it’s not every day that someone quite as handsome and mysterious as Owen Coburn walks into the local pub.

And as the snowflakes begin to swirl on the promenade, Libby realises she’s falling for him. But Owen has been keeping a secret that could destroy everything…

Today feels like quite a bittersweet day as whilst I am so excited for the latest instalment in the ‘Lavender Bay’ series, it’s unfortunately the third and final visit to a place which captured my heart.

All books in the ‘Lavender Bay’ series can be read as a stand-alone, however I would suggest reading the books in order as there are some situations in book three which were mentioned in book two and may be considered as a spoiler. Although saying that, you wouldn’t know that said situation was in book two unless you had already read it sooooo!!!

In this book, the storyline focuses on Libby Stone, and the chip shop at the heart of the community. I know that sounds daft, but those who live in a small village or town will know that chip shops/pubs/antique shops etc can be seen as a hub of the community. I mean, a chippy needs to know how the locals like their sausages battered, right? Whilst that is an important thing to know, Libby’s chip shop isn’t entirely the main focus of the story.

If you have read book two, you’ll already know of Owen Coburn – a man who had come to Lavender Bay to find his next business venture and ended up supporting Libby’s friend, Sam and his dream. That wasn’t all Owen Coburn was good for though, and everything becomes clear in book three. What I thought was very clever was how we were able to watch things unfold from another point of view, despite having seen it from yet another point of view previously. I’ll say one word – Land Rover!

I did feel for Libby as she seemed like such a tortured soul. She wanted to do right by her friends and family, yet wanted to grab her life by the chip butty without offending anyone. Not only that she seemed to struggle with her looks and thought that everyone viewed her as a ‘freak’. I guess I resonated with that as I, just like many others, have (and still do) felt like that many times and it’s quite heartbreaking.

I really didn’t want this series to end as all of the characters brought so much to the series and their individual books, closing the book felt as though I was saying goodbye to a group of people I had come to love and adore. Honestly, I could go on reading about Libby, Beth, Eliza, Sam, Jack, Owen, and of course Bastien, without getting bored. I am gutted!

‘Snowflakes at Lavender Bay’ is a life affirming, touching, and cosy read which was brilliantly and beautifully written, laced with Sarah Bennett’s trademark hilarity and ability to reach into her readers souls on such a deep level.

I would recommend this series in a heartbeat – it is everything I could have wished for in a book and more. Lavender Bay, it has been an absolute pleasure!