Whilst my mint aero traybake sets in the fridge, I’m making good use of my time by sharing my review of Alex Sinclair’s, ‘Tell Me No Lies’. Many thanks to Bookouture for the blitz invite and ARC. Here is my review: 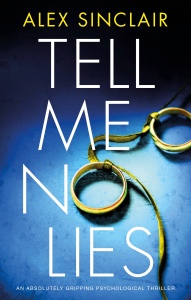 How well do you really know your husband?

Grace Dalton is trying to put her life back together after her husband John died suddenly in a hit and run. Her perfect world is collapsing around her, the home she hoped to fill with children is huge and empty, and she’s paralysed with grief.

But as Grace sorts through her husband’s belongings, she realises the man she loved was lying to her. There’s a mysterious list of names hidden among his things, a secret bank account, and a shocking revelation about his family that he kept from her since the day they met.

Who was John Dalton?

As Grace tries to identify the names on the list she realises something is wrong. She’s imagining things: seeing John in the faces of strangers and finding things in an entirely different place to where she’d swear she left them.

Is Grace losing her grasp on reality, or is someone trying to stop her finding out the truth about her husband?

In the blink of an eye, Grace’s life changed forever. One moment she was celebrating her anniversary with her husband, then the next moment she was trying to work out how she was going to get through the rest of her life as a widow.

It was hard not to empathise with Grace as the situation she had been forced into, wasn’t exactly one she wanted to be in. She had just lost her husband, the man she wanted to spend the rest of her life with, the man she thought she knew inside out…

I had an inkling where the storyline was heading once it became clear that Grace’s husband wasn’t who she thought he was, and I have to say that I did find that a little predictable so the surprise element wasn’t as strong as I would have liked it to be. However, there were a few surprises where Grace’s character was concerned which I was thankful for.

For me personally, ‘Tell Me No Lies’ is an incredibly promising read. The author has a unique voice when it comes to telling a story and I truly believe that, if all of the elements in the book came together in a stronger manner, my rating for this book would be higher. It had everything there to make a belter of a read, but i was just waiting for that bit extra.

Nonetheless, ‘Tell Me No Lies’ has grit needed for this type of book, and I was thoroughly impressed by the overall vibe of the book and the author’s unique story telling.

Alex Sinclair is a psychological thriller author from a quiet country town outside of Melbourne, Australia.

When he’s not spending time with his wife and daughter, Alex can be found obsessing over his fiction. He loves to write fast-paced, gripping stories with killer twists. Alex is an avid reader of psychological thrillers and has a passion for good storytelling.

One thought on “#BlogBlitz! #Review – Tell Me No Lies by Alex Sinclair (@ASinclairAuthor) @Bookouture”

Bloody love this girl! Rescuing her from Spain, where dogs are often treated like a commodity with no laws to protect them, has got to be one of the best decisions I've ever made.