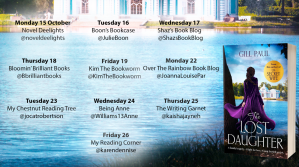 Busy here on TWG today! First up is my review for the absolutely phenomenal new novel by Gill Paul, ‘The Lost Daughter’. Big thanks to Anne Cater for the blog tour invite, and thank you to the publisher for my review copy. Here is my review: 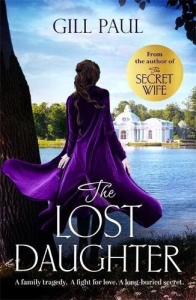 A Russian princess. An extraordinary sacrifice. A captivating secret…

From the author of The Secret Wife, a gripping journey through decades and across continents, of love, devastating loss and courage against all odds.

1918
With the country they once ruled turned against them, the future of Russia’s imperial family hangs in the balance. When middle daughter Maria Romanova captivates two of the guards, it will lead to a fateful choice between right and wrong.

Fifty-five years later . . .
Val rushes to her father’s side when she hears of his troubling end-of-life confession: ‘I didn’t want to kill her.’ As she unravels the secrets behind her mother’s disappearance when she was twelve years old, she finds herself caught up in one of the world’s greatest mysteries.

Omg I think I have just found my most favourite book of 2018!!!! Gill Paul is an incredibly intelligent and vivid storyteller who blurs the lines between fact and fiction. Put it this way, I struggled to work out what parts of the storyline were indeed fiction because, whilst I had heard of the ‘Romanov’s’ rather briefly, I didn’t know the ins and outs of the historical Russian family and knew that Gill Paul would do a better job than Google, at explaining what happened to the Romanov’s all those years ago.

I was completely bowled over by such a heart wrenching yet historically brilliant storyline, as it not only kept me glued to the book until 2.30am, I also couldn’t help but feel as though I was witnessing the 1918 events with my own eyes. It was as though I was there, feeling the emotion which set Maria Romanov apart from the rest. Feeling the pain as she witnessed the aftermath, the end of life as she knew it.

Wow – I wish I could convey my opinions of the book a lot better than what I am currently doing it, but please trust me when I say that ‘The Lost Daughter’ is a gem to be discovered. A gem which, regardless of how much it fades, will always manage to shine bright and beautiful and, if I were to be perfectly honest, I would rather have this type of gem in my hands than a shiny diamond.

I adored how the author switched between the multiple viewpoints as it was just so effortless and natural. There was no confusion on my part at all. In fact, Val’s story blended exceptionally well with Maria’s – I have genuinely never read anything like it.

I urge each and every one of you to sit and read ‘The Lost Daughter’ – it blew me away more times than one book has ever done before. My heart broke for Maria and her family, and I could only hope for the best where Val and Nicole were concerned. The storyline was incredibly hard hitting at times, because the author has used a lot of historical facts in her storyline where the Romanov’s are concerned, as well as the events during 1918 Russia. I still cannot believe that people endured those horrific conditions, watching their loved ones being taken from their families in the blink of an eye.

‘The Lost Daughter’ is an outstanding, breathtaking, powerful, and utterly poignant read which I know will stay with me for a very, very long time. Gill Paul was a favourite author of mine before I read this book, but I can safely say that she is now my go to author for anything historical. This really is my top book of 2018 without a doubt. Absolutely brilliant – I wish I could give it more than 5 stars!

Gill Paul is an author of historical fiction, specialising in relatively recent history. Her new novel, Another Woman’s Husband, is about links you might not have been aware of between Wallis, Duchess of Windsor, and Diana, Princess of Wales.

Gill’s other novels include The Secret Wife, published in 2016, about the romance between cavalry officer Dmitri Malama and Grand Duchess Tatiana, the second daughter of Russia’s last tsar, who first met in 1914. Women and Children First is about a young steward who works on the Titanic. The Affair was set in Rome in 1961–62 as Elizabeth Taylor and Richard Burton fell in love while making Cleopatra. And No Place for a Lady is about two Victorian sisters who travel out to the Crimean War of 1854–56 and face challenges beyond anything they could have imagined.

Gill also writes historical non-fiction, including A History of Medicine in 50 Objects, and a series of Love Stories, each containing fourteen tales of real-life couples: how they met, why they fell for each other, and what happened in the end. Published around the world, this series includes Royal Love Stories, World War I Love Stories and Titanic Love Stories.

Gill was born in Glasgow and grew up there, apart from an eventful year at school in the US when she was ten. She studied Medicine at Glasgow University, then English Literature and History (she was a student for a long time), before moving to London to work in publishing. She started her own company producing books for publishers, along the way editing such luminaries as Griff Rhys Jones, John Suchet, John Julius Norwich, Ray Mears and Eartha Kitt. She also writes on health, nutrition and relationships.

Gill swims year-round in an open-air pond – “It’s good for you so long as it doesn’t kill you”– and is a devotee of Pilates. She also particularly enjoys travelling on what she calls “research trips” and attempting to match-make for friends.