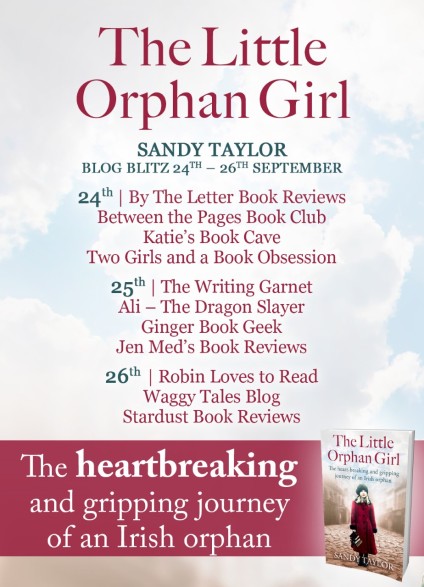 Many thanks to Bookouture for the blog tour invite and the ARC, here is my review of Sandy Taylor’s, ‘The Little Orphan Girl’. 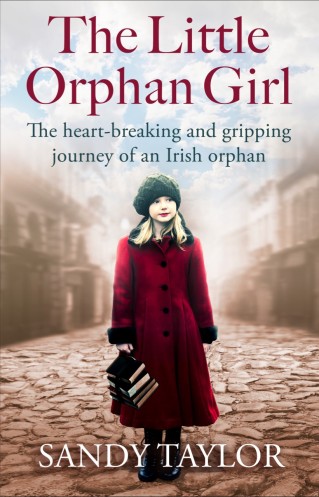 Ireland, 1901: The work house gates clanged shut behind us, as me and the mammy walked down the hill towards the town. I was six years old and leaving the only home I had ever known…

When Cissy Ryan’s real mother comes to claim her from the workhouse, it’s not how she imagined. Her family’s tumbledown cottage has ice on the inside of its windows and is in an isolated, poverty-stricken village in the muddy Irish countryside. But when Cissy is allowed to help neighbour Colm Doyle and his horse named Blue on their milk round one morning, Cissy starts to feel as though friendship could get her through anything.

It’s Colm who looks in on Cissy’s grandfather when she starts at the village school, and Colm who tells her to hold her chin high when she interviews for a position at the grand Bretton House. But in the vast mansion with its shining floors and sweeping staircase, it’s Master Peter Bretton who captures Cissy’s heart with his dark curls and easy laugh.

As Cissy blossoms from a skinny orphan into a confident young girl, Colm tells her she’s as good as anyone and she begins to believe anything is possible. But not everyone with a kind smile has a kind heart, and Cissy doesn’t know that further sorrow lies in store for her.

When Cissy finds herself desperate, alone, and faced with a devastating choice, can she find the strength to survive?

What a beautiful, emotional and poignant read this is! Set in the early 1900’s, at a time where children worked from a very young age. Not only that, the amount of orphaned children was very high. I couldn’t even begin to imagine what it must have been like to be a child who had to grow up in those conditions, even if I am aware that they would have known no different. It’s a shame that they had to know it at all, in my opinion.

‘The Little Orphan Girl’ follows the life of Cissy, a young girl who has to work her fingers to the bone to live. With no ‘mammy’ fighting her corner, Cissy soon learns that she can only rely on herself, yet she can’t help but see the best in people.

My heart went out to Cissy on more than one occasion. It broke my heart that she had to live in those conditions, and it broke my heart that children actually DID live in those conditions back in the day. Like I said above, I know they know no different, but when innocent, young children are involved, it certainly makes you open your eyes and look at the bigger picture.

Sandy Taylor, whilst portraying an emotional scenario when Cissy is a young girl, has written a book which not only captivated my heart, it tugged on my heart strings as though someone was ringing a bell. I cannot fault this author for the delivery of such a touching , rollercoaster ride of a read which took me on an inspiring journey of self discovery, right until the very last page.

A heart-warming, poignant and captivating novel, written with the best intentions. Beautiful.

Sandy Taylor grew up on a council estate near Brighton. There were no books in the house, so Sandy’s love of the written word was nurtured in the little local library.

Leaving school at fifteen, Sandy worked in a series of factories before landing a job at Butlins in Minehead. This career change led her to becoming a singer, a stand-up comic and eventually a playwright and novelist.