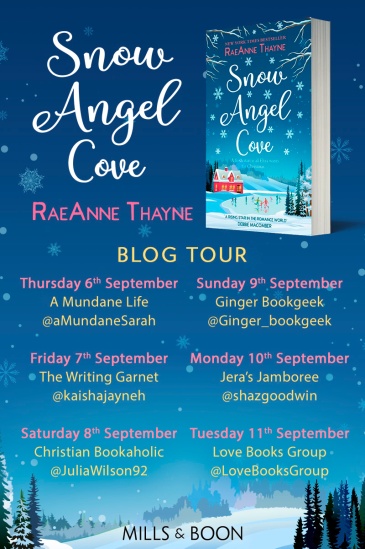 Yes, it’s September, and yes, I am on a blog tour for a festive read several months before the festive season – given the beauty of this book, you would be grabbing it with both hands before Christmas as well, so…..!!!! I am thrilled to be today’s stop on the blog tour for ‘Snow Angel Cove’ by RaeAnne Thayne. Big thank you, as always, to HQStories & Mills and Boon for the blog tour invite and the ARC of the book. Here is my review:

A fresh start is all Eliza wants for Christmas…

Nothing short of a miracle can restore Eliza Hayward’s Christmas spirit. The job she pinned her dreams on has gone up in smoke and now she’s stuck in an unfamiliar, little town for Christmas.

Enter Aidan Caine. He can help Eliza find the perfect Christmas project – the renovation of his lakeside guest lodge. Soon he see how quickly he could fall for her. But is he’s willing to risk his heart on a yuletide romance that could lead to forever?

You know what’s squeal worthy after reading a book that you absolutely LOVED? FINDING OUT THERE IS A WHOLE SERIES!! Yes! I know!!!! ‘Snow Angel Cove’ is the first book in RaeAnne Thayne’s ‘Haven Point’ series, and there is another SEVEN books after this one! I had no idea that that was the case before I started the book as I don’t do blurbs, but I am sure you can imagine my face when I clicked onto Amazon after seeing a snippet at the back of the book – it really was like Christmas had come early. Pardon the pun, naturally.

I had absolutely no idea who RaeAnne Thayne was before I read ‘Snow Angel Cove’, yet I am so glad that I am a bit of a cover nut because this book cover is what attracted me to the story first of all. Isn’t it divine?

Anyway, onto the story. Eliza has packed her old life away, ready to start a new life in a new town with her daughter, Maddie. She’s nervous. Apprehensive. Unsure as to whether she has made a mistake or not as, when Eliza and her daughter arrive at their destination, it soon becomes clear that Eliza’s new job has ended before it had even begun. With no job, nowhere to stay, and an uncertain future ahead of them both, Eliza knows that she needs to come up with a plan and fast. She didn’t quite expect to hit the deck first though….

I don’t want to give too much of the storyline away as it is such a treasure trove of beauty, however, imagine the feeling of Christmas morning as a child, or with children of your own, and imagine that amount of excitement staying with you throughout the entire duration of the novel. ‘Snow Angel Cove’ really is something else. Don’t get me wrong, the book isn’t all snowflakes and Christmas songs as quite a few of the characters, including Eliza, have gone through their own fair share of heartache, devastation, and emotional turbulence. Yet as weird as this sounds, the fact that a lot of the characters came across as slightly vulnerable, raw, and genuine, meant that I was able to connect to the storyline on a much deeper level than if the characters had kept their guards up and hadn’t gone through what they did. If that makes sense. Obviously I’m not using their rocky moments purely for my entertainment, not at all, but because the characters had chinks in their armour, wet tissues under their pillows, and scars both emotionally and physically, it made ‘Snow Angel Cove’ appear even more beautiful.

Eliza’s daughter was such a breath of fresh air. Her one liners were utterly brilliant and I just adored how she was able to see the beauty of every little thing. I have a five-year old myself and I am just mesmerised by how resilient little people can be. They certainly show us adults how to view life.

‘Snow Angel Cove’ ticked every single box for me. From start to finish I was invested in Eliza and Aiden’s life, as well as the community of Haven Point. Sue and Jim were like the grandparents of the book who made me yearn for my own set grandparents just like them. RaeAnne Thayne did a phenomenal job of giving each character their own individual airtime in the book, but I am sure that a lot of readers will have their own favourites. I know I do!

I love, love, LOVE every single thing about ‘Snow Angel Cove’ and everything it stands for. Reading this book made me feel as though I was unwrapping a Christmas present every time I turned the page – it really is such a magical, magical book.

‘Snow Angel Cove’ is like a gigantic hug which warms you from the tips of your toes to the top of your head, and I was absolutely gutted when it came to an end. Such a heart-warming, beautifully written, cosy hug-fest which made me feel as though I was flying in the sky in Santa’s sleigh until the very last page.

I may not have known who RaeAnne Thayne was before but, after reading this outstanding novel, I can assure you that this author now has a fan for life as my bank balance will be taking a massive hit when I get the other books! I really cannot recommend this book enough.