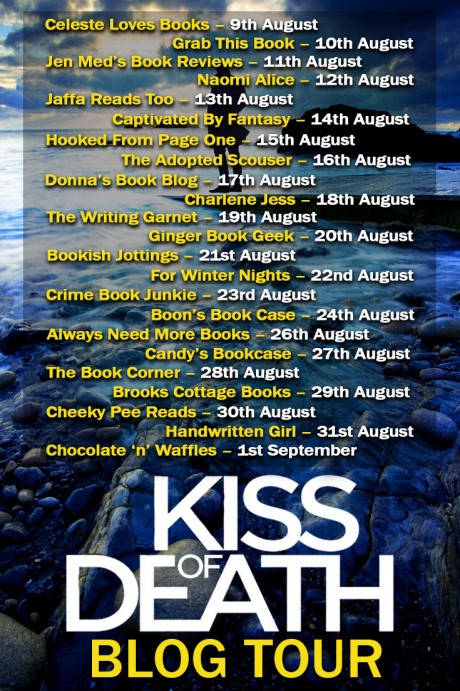 Excuse my lateness with my review of Paul Finch’s ‘Kiss Of Death’, but I literally have just finished reading it! Big thank you to Avon Books for the blog tour invite and the ARC of the book – here is my review: 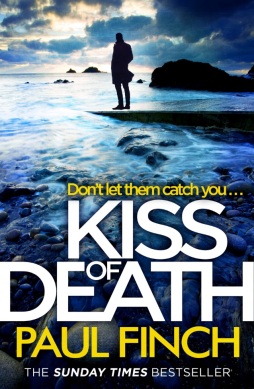 Don’t let them catch you…

A Deadly Hunt
DS ‘Heck’ Heckenburg has been tasked with retrieving one of the UK’s most wanted men. But the trail runs cold when Heck discovers a video tape showing the fugitive in a fight for his life. A fight he has no chance of winning.

A Dangerous Game
Heck realises that there’s another player in this game of cat and mouse, and this time, they’ve not just caught the prize: they’ve made sure no one else ever does.

A Man Who Plays With Fire
How far will Heck and his team go to protect some of the UK’s most brutal killers? And what price is he willing to pay?

I don’t usually do this, and I one who dislikes reviews with swearing in, but I have to break my rule just this once as I don’t think a measly ‘oh my goodness!’ will cut the mustard this time around.

Fucking hell! I mean….fuuuuuucking hell! What an ending!!!!!! I have never read anything like it, and I am also extremely gutted that the next book in the series is not available right this second (there had better be another book in the series!). There’s nothing like leaving your readers hanging is there? Usually I dislike endings where I find myself with multiple questions instead of getting things resolved, yet this just….works. No, wait, it doesn’t just work, it’s absolutely genius.

I must admit that I haven’t read many of the ‘Detective Mark Heckenburg’ series, nor have I read them in order. However, ‘Kiss Of Death’ was a belter of a read as a standalone. Of course I must have missed out on the basic background of good ol’ Heck and Gemma, but seeing as my knuckles went white as I gripped the kindle whilst I was reading ‘Kiss Of Death’, I have a slight feeling that I will be going back to book one and binge reading them all. In fact, that is exactly what I am going to do – how can I not?! Paul Finch is a genius!!!!

Heck seems to have his own set of rules where his job is concerned, especially if it means him being smack bang in the firing line despite being told to step away by his superiors. Heck’s colleagues all know that they have to follow procedures and do things by the book, however Heck’s memo with that on seems to have been mislaid….every time. I found his bulshyness quite arrogant yet it ended up being quite endearing as his passion pushed aside the arrogance like no tomorrow.

If you’re after a story which raises your heart rate, keeps you glued to your seat, makes your jaw hang open like you’re pretending to be a fish, as well as gripping hold of things like you’re about to fall off, then ‘Kiss Of Death’ is PERFECT for you. Don’t shoot me here, but I wasn’t overly keen on the book when I first started reading it. It took me at least 30 odd percent before I was able to lose myself in Heck’s powerful persuasion’s and Paul Finch’s gripping storyline – I felt that the pace was too slow to begin with which ended up making the hook a lot slower to do its job. However, once the book surpassed the 30 odd percent mark, I became gripped by what my eyes were reading. It’s gruesome, I won’t lie, but yet again Paul Finch makes it work!

The more of ‘Kiss Of Death’ I read, the faster the pace became and the more intense the situations within the storyline became. There was so much to keep focused on, I couldn’t help but feel as though my head was turning in every direction to keep up with Heck and the gang as they attempt to take on another, well, gang. No, I’m not complaining either!

Despite my earlier reservations, ‘Kiss Of Death’ ended up surpassing all of my expectations, making this one of the best books I have read so far this year! I am so pleased I ignored my earlier thoughts as what a cracking (literally), spine tingling, chilling, and utterly, utterly suspenseful read this turned out to be. I’ve said it once but I will say it again – that ending!!!!! Paul Finch has certainly got his readers where he wants them, and given the outstanding strength of his latest novel, I will be standing here with bells on waiting for the next book in the series!!!

Out-flipping-standing – give this man an award! Brilliant. Intense. Absolute GENIUS!