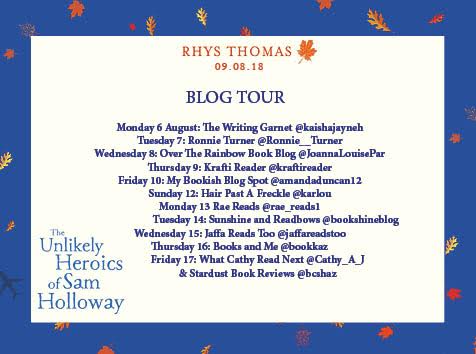 Apologies for the lateness with this post today! I am kicking off the blog tour for Rhys Thomas and ‘The Unlikely Heroics of Sam Holloway’. Big thank you to Anne from RandomThingsTours for the blog tour invite, and thank you to WildfireBKS for the ARC. Here is my review:

Sam Holloway has survived the worst that life can throw at you. But he’s not really living. His meticulous routines keep everything nice and safe – with just one exception…

Three nights a week, Sam dons his superhero costume and patrols the streets. It makes him feel invincible – but his unlikely heroics are getting him into some sticky, and increasingly dangerous, situations.

Then a girl comes into his life, and his ordered world is thrown into chaos … and now Sam needs to decide whether he can be brave enough to finally take off the mask.

Both hilarious and heart-warming, this is a story about love, loneliness, grief, and the life-changing power of kindness.

I totally didn’t choose this book to read because of the surname namesake….

Okay, I did, and because the cover is rather intriguing.

Whilst Sam Holloway may not be a typical Iron Man or Thor, he isn’t afraid to become a superhero in his own right. I mean, everyone would love their shopping being carried home, right? Due to Sam’s past, the wall he has built is taller than the beanstalk from ‘Jack and the Beanstalk’, with his confidence and self-assurance lower than lower. So, to help himself, he helps other people. Makes sense, right? Actually, yes. Yes it does. Sometimes trying to help ourselves is an incredibly difficult task to complete, yet if we were to help another person out with something minor or even similar to something we need help with ourselves, our subconscious deliver because we aren’t afraid to help others. We are afraid to help ourselves. Just like Sam.

This book is such a thought-provoking and poignant read, with so many messages incorporated into the story which readers will be able to take away with them without even realising they’re doing it. I thought the overall premise of the story was very cleverly crafted and written from the heart. I also thought that the authors take on the subject matter, including the path he put his main character on, incredibly unique and one of a kind.

I really did enjoy how different the story was, and I thought the way that Sam Holloway was portrayed, was very heartfelt. There were times where I just wanted to give him a hug, don my Catwoman costume, and help him just like he had been helping others.

‘The Unlikely Heroics of Sam Holloway’ just goes to show that kindness should never, ever be underestimated, and it doesn’t matter whether you choose to dress up as a superhero, dress up as yourself, or even be anonymous, to embark on being kind. You just need to do it.

A warm-hearted, spirited read which made me think, as well as melt a few of the icicles around my heart while it was at it. A pleasure to read. Everyone should have a hero like Sam Holloway.

Joined the #booktrolley gang, and finally decided to sort out some of my proof copies. This is by no means all of my proofs, just a small selection.