It isn’t often that I agree with publicity tag lines for books, but I am 100% agreeing with this one! I could NOT put it down! I am so, so excited to be kicking off the blog tour for #NowYouSeeHer by Heidi Perks, ahead of publication of the hardback on the 26th July (e-book is available now, with the paperback to follow in 2019). Huge thanks, as always, to Rachel Kennedy and the team at ArrowPublishing, for asking me to be involved in the tour and for the ARC of the book. Here is my review, I hope I do the book justice! 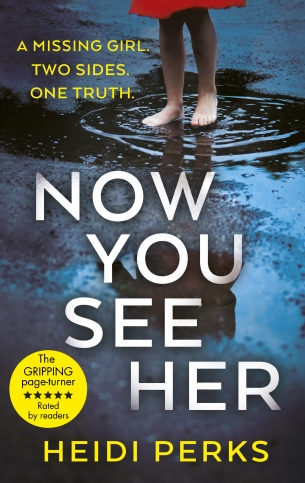 Charlotte is looking after her best friend’s daughter the day she disappears. She thought the little girl was playing with her own children. She swears she only took her eyes off them for a second.

Now, Charlotte must do the unthinkable: tell her best friend Harriet that her only child is missing. The child she was meant to be watching.

Devastated, Harriet can no longer bear to see Charlotte. No one could expect her to trust her friend again.
Only now she needs to. Because two weeks later Harriet and Charlotte are both being questioned separately by the police. And secrets are about to surface.

Someone is hiding the truth about what really happened to Alice.

Helloooooooo biggest book hangover of the year! I finished reading #NowYouSeeHer in the early hours of Sunday morning, and since then I have tried (and failed) to get into several books because I am suffering with not only my biggest book hangover of the year, but my biggest book hangover EVER! I mean, come on, have you read this book yet? You must rectify that pronto as ooooohhhhhh my goodness me, what a phenomenal, hair-raising, spine tingling, and energetic read this is. I probably shouldn’t be saying this given the theme of the book, but I fluffing loved it! Obviously I didn’t love the theme, because that would be weird, BUT, I thought the way that Heidi Perks delivered it in her storyline was mind-blowing.

‘Now You See Her’ switches between the past and the present, and between the two main characters, Charlotte and Harriet. For the first time ever, Harriet is leaving her daughter with another person, so she asks her only friend, Charlotte, to babysit Alice alongside her own children. Simple enough, right? Wrong. One minute Alice was there, and then the next moment she was……nowhere to be seen. With guilt eating away at Charlotte from the inside out, she struggles to comprehend what has happened, especially when Alice’s disappearance hits the news and Charlotte finds herself in the firing line. Understandable, right? I mean, you asked your best friend to babysit your daughter, hoping that they would look after her and return her safely at the arranged time. Therefore, you would expect that to happen, you wouldn’t expect to be told that your daughter was now missing. Well, I wouldn’t.

Obviously, the police get involved and Charlotte finds herself growing accustom to the decor in the local police station as they try to get to the bottom of Alice’s disappearance. However, due to Charlotte being unable to give the police the answers they require, will it mean that her cards are now marked?

With the publicity of ‘Now You See Her’, the publishers have hashtags with #TeamCharlotte and #TeamHarriet on them, but to be perfectly honest, I still can’t say which team I am on! Can’t I say that I am on #TeamCharriet? There is so much to this storyline aside from the missing child. I would love to be able to go into detail, but I can’t due to spoilers. I just want to talk about this book!!!! Someone? Anyone?!

Just like most psychological thrillers/crime/suspense novels I read, I attempt to work out whodunnit before I reach the end of the book. Let’s just say that I won’t be making Detective anytime soon! Although, giving myself a teeny bit of credit, I was pretty adamant that I had the culprit by halfway through this book, but I quickly found myself questioning my own decision the more the storyline progressed. Heidi Perks is an exceptional writer – not only has she written about the lives of multiple characters, she has written them in such a way that makes the reader question every conceivable thing. The weird thing about that though, is the fact that the words are written just like any other book, in black and white. Perks may have just been describing the events of what happened the day Alice went missing, yet there was definitely more to those words that meets the eye.

‘Now You See Her’ is a very, very cleverly written novel which had me on high alert from the first page, until the very last. I am utterly flabbergasted by the strength behind the authors words, and how my mind was able to convey them due to the snippets of doubt which Heidi Perks laced her words with. At the very beginning, my mind was strong and things made perfect sense. But, by the time I had reached the end of the book, I was unable to trust anything. Hell, I didn’t even believe it when the clock said that it was 1.45am!

I am envious of every reader who gets to read ‘Now You See Her’ for the very first time – you are in for an absolute treat! Heidi Perks has written a truly phenomenal book and I, hand on heart, cannot find fault with a single thing. My first thought as I finished this book, was ‘one of the best books I have ever read’, but now, I have to say that that has changed now that I have had the time to digest Perks’ outstanding talent. ‘Now You See Her’ is my most favourite book of all time, my most favourite book of 2018, and Heidi Perks has very quickly become one of my all time favourite authors. This is a book to lose yourself in, and Heidi Perks should be incredibly proud of what she has achieved! I know I am, and I didn’t even write it! I cannot WAIT to read more from this author, that’s for sure, even if she has set the bar incredibly high!

Highly recommended, ‘Now You See Her’ is THE book to read without any disturbance, and Heidi Perks is definitely THE author to watch in the future. Bloomin’ brilliant!