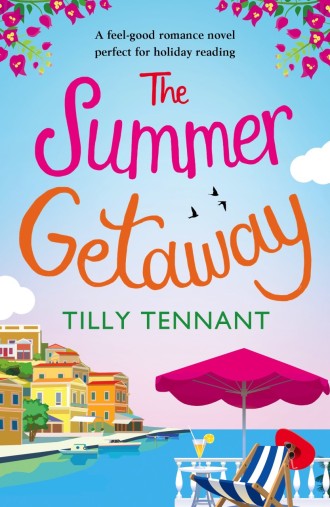 Ashley Moon is all set for a dream holiday with her daughter in the glittering French Riviera. But nothing can prepare her for the shock of discovering who’s staying in the villa next door…

Ashley Moon got much more than a suntan on her first ever foreign holiday; one whirlwind romance and nine months later she had a daughter, Molly.

Too heartbroken and proud to ever contact the father, Ashley made a decision to go it alone and raise her daughter herself. Fifteen hard and lonely years later, she finally has the chance to take Molly on her first ever holiday; a gorgeous, all-expenses-paid trip to the charming French resort of St. Raphael.

It is the perfect setting for a week of quality time together; they plan to cycle through the sun-drenched vineyards, lounge by the glistening pool and practise their French on friendly locals. And just when Ashley thought things couldn’t get any better, comes the news of a handsome new occupant in the villa next door.

But fate has other plans for Ashley. One look into her neighbour’s dark hazel eyes is all it takes to give her the shock of her life. Standing in front of her is Haydon, Molly’s long-lost father and the holiday fling she thought she’d never see again.

As the temperature on the Cote D’Azure steadily rises and Ashley and Haydon begin to spend more and more time together, will Ashley find the courage to tell him who she is – and more importantly, who Molly is?

Maybe it’s just me, but the vibe of ‘The Summer Getaway’ felt a bit different to Tilly Tennant’s usual style, and no I don’t mean that in a bad way! I have read, and enjoyed, a lot of the authors previous novels and whilst I do enjoy the romance involved in them, I did really enjoy the change of direction where ‘The Summer Getaway’ was concerned. For me, the storyline was very deep and given that the theme of fatherhood was quite prominent throughout, I couldn’t help but get a little emotional due to my own situation. Ashley is such a wonderful character to have at the core of the book, as she unknowingly became the backbone of the entire storyline which I loved. Single mums rock!

Whilst I did throughly enjoy reading ‘The Summer Getaway’, I did feel as though the storyline ended rather abruptly as we had been on a journey with some very colourful characters, looking into our crystal balls regarding their futures, and then all of a sudden it stopped. I know, I know, I’m greedy when it comes to Tilly Tennant’s writing, but surely that is a good thing that I didn’t want it to end? Maybe there is scope for some of the characters to return in another book later down the line? My fingers are crossed as I really would love to see how everything plays out for Ashley and Haydon, and of course the girls.

Every time I read a Tilly Tennant novel, my insides get a massive hug and thankfully, ‘The Summer Getaway’ was no different, hugging me from the inside out and giving me the feel-good, heartfelt vibe that Tilly Tennant is known for. This is the perfect escapism for any time of the year, not just Summer.

Tilly Tennant was born in Dorset, the oldest of four children, but now lives in Staffordshire with a family of her own. After years of dismal and disastrous jobs, including paper plate stacking, shop girl, newspaper promotions and waitressing (she never could carry a bowl of soup without spilling a bit), she decided to indulge her passion for the written word by embarking on a degree in English and creative writing. She wrote a novel in 2007 during her first summer break at university and has not stopped writing since. She also works as a freelance fiction editor, and considers herself very lucky that this enables her to read many wonderful books before the rest of the world gets them.

Hopelessly Devoted to Holden Finn was her debut novel; published in 2014 it was an Amazon bestseller in both the UK and Australia. In 2016 she signed to the hugely successful Bookouture and is currently working on her next Tilly Tennant novel. She also writes as Sharon Sant, where she explores the darker side of life, and Poppy Galbraith, where things get a little crazier.