Second blog tour of the day and it’s for Emma Davies and ‘Summer at the Little Cottage on the Hill’. As always I want to thank Bookouture for the blog tour invite and the ARC of the book. Here is my review: 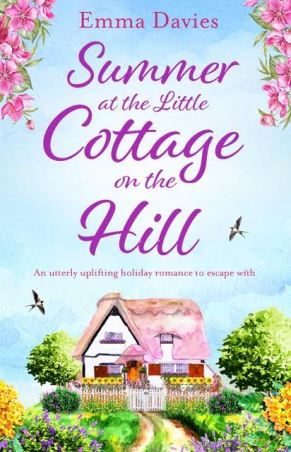 Take an endless stroll through wild meadows and breathe in the sweet aroma of flowers in full bloom. The first ever guest at the little cottage on the hill is looking for an escape, but her past is not far behind her…

Thirty-two-year-old ‘ice queen’ Isobel slams the cottage door and pulls the curtains shut. She has just six weeks to practise for a secret project that could save her career and no one must know she is here.

When Tom, the local thatcher with eyes as blue and deep as the ocean, hears the sound of her violin on the breeze he feels a tug at his heart-strings that reminds him of happier times. Who is this mysterious new lodger, and why does she look so familiar?

Desperate to find out more, Tom is devastated when Isobel refuses to enjoy everything the farm has to offer. He won’t give in, but just when it looks like Isobel is coming out of her shell, someone recognises her and the troubles from her past threaten to take away everything she has been working towards.

After a fabulous first book in the series, I was so eager to get stuck into the next instalment from Emma Davies, and what an instalment it was!

The very first paying  visitor to the cottage at Joy Acres farm was musician, Isobel. With her icy cold exterior and patience of a toddler, Isobel found it quite difficult to gel with the people on the farm. She didn’t want anyone to get close to her, yet the local thatcher completely disregarded that and made it his own personal mission to get her out and about. Of course that wasn’t as plain sailing as he had hoped it would be, but Tom wasn’t going to be giving up anytime soon, especially when he realises that he understands Isobel a lot more than she gives him credit for.

At first, Isobel has the type of personality that would make anyone run a mile, or, in our case, raise our eyebrows and think ‘what the….’. I did cut her a bit of slack though when it became clear that Isobel was struggling with several things. Could Tom get her to open up to him? Would he even be able to help her? And, if he could help her, would she even let him?

Seeing as Tom’s past includes coming face to face with the bottom of a pint glass, when he thinks he knows Isobel from somewhere, he isn’t sure whether it is mind playing tricks on him thanks to the drink, or whether he does actually know her. Maybe there’s a good reason for that?

Tom and Isobel both have a lot of skeletons in their closets, but it seemed that Joy Acres farm was doing what it was supposed to do by bringing everyone ‘joy’. My opinion of Isobel changed drastically the more I got to know her, with me feel quite empathetic towards her by the end of the book. She has had a tough time and thanks to seeing the light with her mother, I think Isobel realised just how far she has come.

When I finished reading ‘Summer at the Little Cottage on the Hill’, I sighed a contented sigh as, for characters who appear to be quite flawed, their journey to patching their flaws was such a beautiful thing to watch and be a part of. It was as though something just clicked, making me think to myself ‘you know what, maybe they will be okay’. I hadn’t quite realised how invested in the storyline I was until my mind conjured up those thoughts.

I adore Emma Davies’ story telling and her least novel is proof that this author is incredible at her craft. I loved watching people come together in the most unlikeliest of circumstances, and I loved being ‘involved’ in a fictional family who, instead of tearing each other down, they helped each other up every single day. It’s books like this which make me think that the world is actually an alright place to be, especially if it contains people like the ones in this book.

Yet another magnetic, enchanting, relatable, and beautiful read – never mind 5 stars, this book needs a bucket full of pixie dust!

After a varied career, Emma Davies once worked for a design studio where she was asked to provide a fun and humorous (and not necessarily true) anecdote for their website. She wrote the following: ‘I am a bestselling novelist currently masquerading as a thirty something mother of three.’ Well the job in the design studio didn’t work out but she’s now a forty something mother of three and is happy to report the rest of her dream came true.

After many years as a finance manager she now writes full time, and is far happier playing with words than numbers. She lives with her husband, three children, and two guinea pigs in rural Shropshire where she writes in all the gaps in between real life. It’s a county she adores, her love of its beautiful people and landscapes providing endless inspiration for her books, and in fact the only thing that would make Shropshire more idyllic is if it were by the sea.

Pop over to her website www.emmadaviesauthor.com where, amongst other things, you can read about her passion for Pringles and singing loudly in the car. You can also wave to her on twitter @EmDaviesAuthor or find her on Facebook

One thought on “#BlogTour! #Review – Summer at the Little Cottage on the Hill by Emma Davies (@EmDaviesAuthor) @Bookouture”