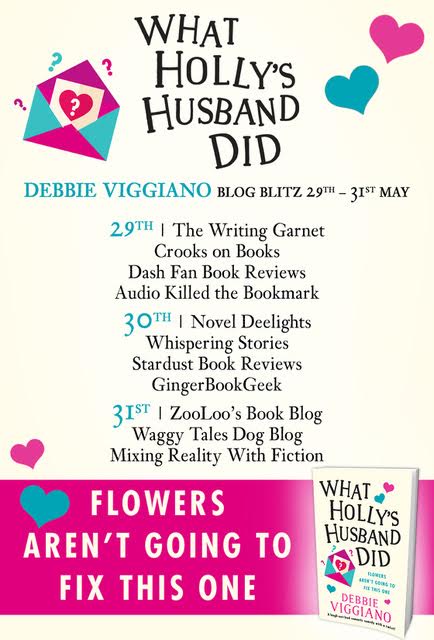 Congratulations Debbie Viggiano and ‘What Holly’s Husband Did’! I am delighted to be one of the bloggers helping to kick off Debbie’s blog blitz on her publication day! Many thanks to Kim Nash from Bookouture for the blitz invite and the ARC. Here is my review: 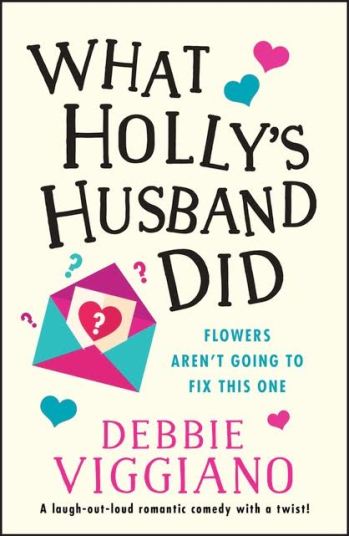 Holly Hart has been married for fifteen blissful years to hubby Alex. Well… if you don’t count last Christmas, when she accidentally found a load of flirty texts on Alex’s phone. But every marriage has its ups and downs and Alex had a perfectly reasonable explanation… so why can’t Holly forget what she saw?

With the help of best friends Jeanie and Caro, as well as their handsome neighbour Jack, Holly resolves to settle her mind once and for all with a bit of sneaky detective work. So what if her husband isn’t exactly Brad Pitt? He’s hers, and if someone else is trying to steal him she wants to know who… But the truth is way more shocking than Holly ever anticipated. Can Holly, let alone her marriage, ever recover from what she discovers?

If you’re not following Debbie Viggiano on social media already, I suggest you do so right now! Before I read ‘What Holly’s Husband Did’, I had been stalking the author on social media, laughing out loud at the hilarious things she posted. I had everything crossed that Viggiano would project her own genuine humour into the storyline itself and honestly, I was not at all disappointed.

I don’t want to give anything away, but this story is absolutely hilarious, with the author using some of her personality traits for her own characters. There are no ‘oooops mustn’t say that’ moments as it was clear from the onset that Debbie Viggiano was going to write her story with no limitations. Take a look at Holly for example, a character who couldn’t give a monkeys whether she kept up with the Jones’ or not, highlighting the fact that people in relationships with children, do actually end up losing their shizzle!

Alongside Holly, ‘What Holly’s Husband Did’ was the home of such a mixed bag of characters who both made me laugh and annoy me at the same time. Holly and her friends don’t pretend that everything is hunk dory…well, they do at first, but in the grand scheme of things they don’t – if they wish to talk about positions or the lack of, they would do so to their heart’s content as if they’re merely talking about the whether. Seriously, that is genuinely how laid back and refreshing this story is.

Not only that, ‘What Holly’s Husband Did’ contains enough drama to rival all of the soap opera’s shown on TV in the UK at the moment, and by golly I wish I had had popcorn whilst I was reading it! There was so much drama, skeletons in closets, and shockers to keep me content until the very last page!

I love how the authors personality shines through the storyline as it cemented the laid back and relatable vibe overall. I also loved how every event in the book flowed, leaving me eager to turn the pages to find out what happened next. I am so pleased that I got the opportunity to read Debbie Viggiano’s newest release – I honestly don’t think I have laughed that much in ages. I’m surprised my neighbour didn’t come knocking, asking me if I had a pig in my house! (Yes, I snlaughed…..loudly).

Again, being very careful here for spoilers, the concluding chapters were absolutely fluffing hilarious and completely unexpected! I didn’t see it coming at all and, whilst it did appear to be utterly bonkers, it was also utterly brilliant and confirmed that ‘What Holly’s Husband Did’ is a book that I will be recommending for a very, very long time.

Snlaugh inducing and side splittingly hilarious, ‘What Holly’s Husband Did’ will have you begging for more, whilst also leaving you feeling bereft as you say t’ra to a truly brilliant and memorable novel.

Prior to turning her attention to writing, Debbie Viggiano was, for more years than she cares to remember, a legal secretary. She lives with her Italian husband, a rescued puppy from Crete, and a very disgruntled cat. Occasionally her children return home from uni bringing her much joy…apart from their gifts of dirty laundry.

One thought on “#BlogBlitz! #Review – What Holly’s Husband Did by Debbie Viggiano (@DebbieViggiano) @Bookouture”