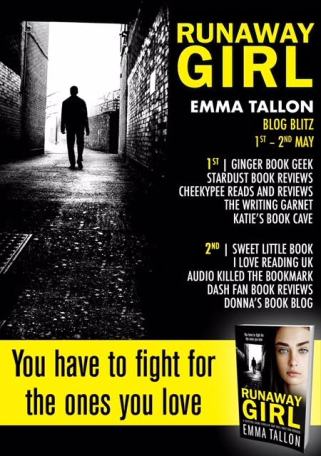 Blitz 2 of the day and it’s for a ‘Runaway Girl’ who goes by the name of Emma Tallon! Here is my review:

Anna Davis has spent years terrified of her sadistic gangster boyfriend. Right up until she runs away in the dead of night, she’s frightened he will kill her. And she knows he still will, if he ever finds her…

As Anna starts her new life, she meets two strangers who will change her fortunes forever. Tanya Smith is a gorgeous East London stripper with a big heart. Anna loves Tanya’s attitude to life and the pair quickly become inseparable and business partners. And East End baron Freddie Tyler is everything Anna’s ex-boyfriend was not – he’s kind, caring and would do anything to make Anna happy.

But are they both telling Anna the truth about who they really are?

Just as Anna begins to see a brighter future for herself, her past comes back to haunt her. She could be about to lose everything – even her life. But she’s a different person now. She’s got something to live for and she’s not going to give up without a fight.

Well, this is a tad dark! I think I underestimated just how dark this book was going to be, not that I’m complaining of course! Obviously the title being what it is, doesn’t exactly suggest a Cinderella and Prince Charming type storyline, but the contents threw me overboard like Jack in the Titanic.

Let’s just say that Anna and her boyfriend haven’t always seen eye to eye, with Anna now realising that if she doesn’t leave now, she won’t have a life to leave. Will her boyfriend catch up with the runaway girl? Or is someone else to get her, maybe a wolf dressed in sheep clothing?

A new author for me, but one that is now on my radar for future releases, especially if any forthcoming novels are as fast paced and intense as this one! ‘Runaway Girl’ is not an easy read due to the domestic side of things, but the content of the book is on par with modern day society and, whilst it is an incredibly hard hitting read, it is one that may make people sit up and take notice. Just because someone smiles at you, it doesn’t mean that they’re nice, and just because someone frowns at you, it doesn’t mean they’re going to pinch your lunch money. However, poor Anna learns the hard way as the ‘Runaway Girl’ realises that the only person you can trust is yourself.

Dark, devious and intense, this shocking read will leave you reeling.

Emma Tallon is a British, gritty crime writer, adventurer, Londoner and mother to a young son. Starting her career a few years ago as a ghostwriter, Emma crafted some of the most adventurous, edgy and heart-wrenching stories you can find on the shelves today.

In March 2017 Emma stepped out of the literary shadows and self-published her first book, Life Game. The book was an instant success, the results far exceeding anything she had expected. As news of Life Games popularity spread, she joined forces with W.F.Howes and the audiobook was launched in October 2017.

In December 2017, Emma signed a three book deal with publishers Bookouture. This included Life Game which was changed, re-edited and now re-released as Runaway Girl.

Drawing inspiration for her books from a mixture of her own observations and an active imagination, the characters Emma paints are colourful and larger than life. Her story lines are an interesting recipe of deep emotion and violent grit, that keep her readers engrossed.

With two more books in the works for this series already, Emma has many more stories planned out for the future.