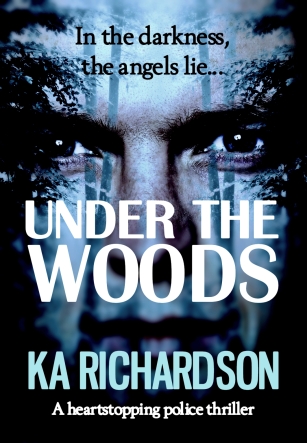 When a homeless woman, Cheryl Whiffen, hears voices in her head telling her to do bad things, she can’t help but obey.

But when Cheryl becomes the victim of a serial killer who is collecting angels, this time the voices can’t help her. She is deemed not worthy of being an angel and the killer has to find another way to dispose of her body.

TJ Tulley has connections in the police force – her brother Jacob is a digital forensic analyst and her soon to be sister-in-law is a CSI. She knows many of their colleagues so when someone breaks into her house at the riding stables she owns, it’s not a surprise when the police dispatch CSI Jackson Doherty.

Is there a link between a suspicious fire at the stables and the serial killer?

As TJ and Doherty get closer to the truth they don’t realise the danger they are in. He is a killer – he’s angry at their investigation and he’ll do just about anything to protect his angels…

I really do like finding new authors to read, especially when I’ve heard so many good things about them previously. Of course I want a piece of that action, who wouldn’t? I feel like I’m about to sound like an AA member, but, my name is TWG and I have never read a KA Richardson novel before – until now. Shameful I know! I’ll let you into a little secret though, this won’t be the last book I’ll read by this author either. Fan for life? Oh I think so!

I’ve heard of people collecting things, books, shoes, stamps, money – you know, that kind of thing. I have never (until now) heard of someone collecting people (unless you’re interested in polygamy). But, the main concept of ‘Under The Woods’ is a man collecting ladies of the night, calling them angels as he believes that those types of people won’t ever be missed which in his eyes is good. Why? Because once he has finished with them they will be dead to the world. Literally.

‘Under The Woods’ switches between the killer’s viewpoint and main character TJ Tulley, who is a victim in her own right. As the storyline goes on, the full extent of the killer’s collection is close to being outed, but what on Earth has TJ Tulley got to do with it?

I have been known to be a little bit of a wimp where books like this are concerned. I’ve never been one for creepy – trust me on that, I was scared of the movie ‘Edward Scissor Hands’ when I was a kid and I have never watched it since! However, I have been putting on my big girl pants a lot more now and I welcome creepy storylines. To be honest, I wouldn’t even describe ‘Under The Woods’ as just ‘creepy’! ‘Brilliantly creepy and severely chilling’ are the words I would definitely use to describe KA Richardson’s latest novel.

The author has executed (pardon the pun) the storyline in such a clever manner, keeping the pace skyrocketing until the very last second. The detail surrounding the forensic elements are fascinating to read, especially if you’re naturally nosy like I am! Even though I haven’t read the other books in the series, I delved straight into the complexity of the characters like a duck to water – I cannot wait to backtrack and start with book one!

Creepiness at its finest with enough chilly elements to rival a blue slush puppy (I am mad on those!). I couldn’t recommend this book even more if I tried, you have to read it, just make sure you keep a light on. Just in case…

My name is Kerry-Ann Richardson (generally known as Kerry) and I write as KA Richardson. I started writing the North East Police series in 2010 when I was working towards my MA Creative Writing – I used the first 15000 words of With Deadly Intent as my dissertation. I passed my MA in 2011 and kept on writing. This all came about from working as a Crime Scene Investigator – I’d always written but when I was a CSI I went to see a psychic, Anthony, and he wanted to know why I wasn’t writing. He reminded me that it was my passion and said he could see me signing in Waterstones in 5 years. That was 5.5 years before my first ever signing in Waterstones so he wasn’t far wrong!

I did the normal things writers do when their book is ready to go out into the world – submitted to agents etc. I got a few nice personal responses back – still saying no but being constructive and polite about it. I approached Darren Laws from Caffeine Nights whilst at a crime festival and he asked to see my work. He agreed to publish With Deadly Intent from there, and once that was out I approached Bloodhound Books as wanted to know if there was any other interest in my novels. Bloodhound came back within 24 hours and offered me a 3 book deal!  And I’ve since signed an additional 3 book deal with them which covers the series up to and including book 7!

One thought on “#BlogBlitz! #Review – Under The Woods by KA Richardson (@kerryann77) @BloodHoundBook”