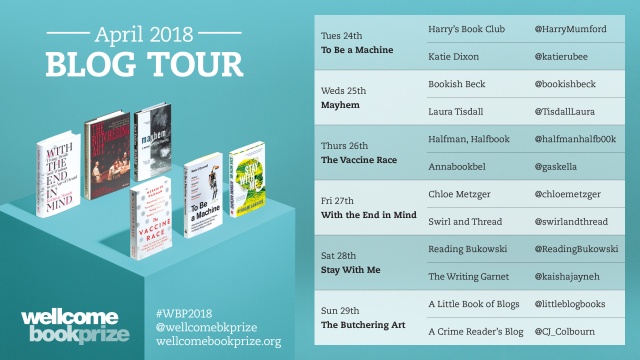 It is an honour to be taking part in the blog tour for the WellComeBookPrize. For those  that aren’t aware of this, here is some more information about the book prize and the collection featured in the long list:

About the Wellcome Book Prize

Worth £30,000, the Wellcome Book Prize celebrates the best new books that engage with an aspect of medicine, health or illness, showcasing the breadth and depth of our encounters with medicine through exceptional works of fiction and non-fiction.

Previous winners of the Prize include Maylis de Kerangal (author) and Jessica Moore (translator) for Mend the Living in 2017, Suzanne O’Sullivan for It’s All in Your Head in 2016, Marion Coutts for The Iceberg in 2015, Andrew Solomon for Far from the Tree in 2014, Thomas Wright for Circulation in 2012, Alice LaPlante for Turn of Mind in 2011, Rebecca Skloot for The Immortal Life of Henrietta Lacks in 2010 and Andrea Gillies for Keeper: Living with Nancy – a journey into Alzheimer’s in 2009.

Wellcome Collection is the free museum and library for the incurably curious. Inspired by the medical objects and curiosities collected by Henry Wellcome, it connects science, medicine, life and art. Through its exhibitions, live programming, and digital and publishing activity, it makes thought-provoking content which aims to challenge how we think and feel about health.

Wellcome Collection is part of Wellcome, a global charitable foundation that exists to improve health for everyone by helping great ideas to thrive. Both politically and financially independent, it supports scientists and researchers, takes on big problems, fuels imaginations and sparks debate.

The book I am featuring for the blog tour is ‘Stay With Me’ by Ayọ̀bámi Adébáyọ̀. Here is an extract, as well as more information about the book itself: 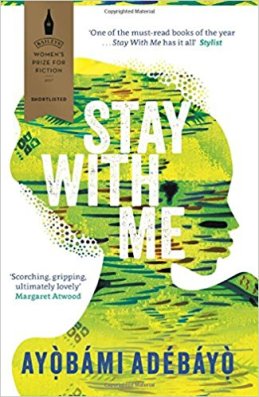 Yejide is hoping for a miracle, for a child. It is all her husband wants, all her mother-in-law wants, and she has tried everything. But when her relatives insist upon a new wife, it is too much for Yejide to bear.

Unravelling against the social and political turbulence of 1980s Nigeria, Stay With Me is a story of the fragility of married love, the undoing of family, the power of grief, and the all-consuming bonds of motherhood. It is a tale about the desperate attempts we make to save ourselves, and those we love, from heartbreak.

Ayọ̀bámi Adébáyọ̀ (30, Nigeria) stories have appeared in a number of magazines and anthologies, and one was highly commended in the 2009 Commonwealth Short Story Prize. She holds BA and MA degrees in Literature in English from Obafemi Awolowo University, Ife. She also has an MA in Creative Writing from the University of East Anglia, where she was awarded an international bursary for creative writing. She has been the recipient of fellowships and residencies from Ledig House, Hedgebrook, Sinthian Cultural Institute, Ebedi Hills, Ox-Bow School of Arts and Siena Art Institute. She was born in Lagos, Nigeria. In 2017 ‘Stay With Me’, her debut novel, was shortlisted for the Baileys Women’s Prize for Fiction.

My parents-in-law lived in Ayeso, an old section of town that still had a few mud houses. Their house was a brick building, with a front yard partially enclosed by a low cement fence. When I arrived at the house, Moomi was sitting on a low stool in the front yard shelling groundnuts into a rusty tray that sat on her lap. She looked up as I approached and looked down again. I swallowed and my steps slowed. There was something wrong.

Moomi always greeted me by shouting Yejide, my wife. The words were as warm as the embrace that usually followed them.

‘Good evening, Moomi.’ My knees trembled as they touched the concrete floor.

‘Are you pregnant now?’ She said without looking up from the tray of groundnuts.

I scratched my head.

‘Are you barren and deaf too? I say, are you pregnant? The answer is either, yes, I am pregnant or no, I still haven’t been pregnant for a single day in my life.’

‘I don’t know.’ I stood up and backed away until she was not within the reach of my clenched fist.

‘Why won’t you allow my son to have a child?’ She slapped the tray of groundnuts on the floor and stood up.

‘I don’t manufacture children. God does.’

She marched towards me and spoke when her toes were touching the tips of my shoes.

‘Have you ever seen God in a labour room giving birth to a child? Tell me, Yejide, have you ever seen God in the labour ward? Women manufacture children and if you can’t you are just a man. Nobody should call you a woman.’ She gripped my wrists and lowered her voice to a whisper. ‘This life is not diffi­cult, Yejide. If you cannot have children, allow my son to have some with Funmi. See, we are not asking you to stand up from

your place in his life, we are just saying you should shift so that someone else can sit down.’

‘I am not stopping him, Moomi,’ I said. ‘I have accepted her. She even spends the weekends in our house now.’

She held her thick waist and laughed. ‘I am a woman too. Do you think I was born last night? Tell me, why has Akin never touched Funmi? He has been married to her for over two months. Tell me why he has not removed her wrapper once. Tell me, Yejide.’

I stifled a smile. ‘It is not my business what Akin does with his wife.’

Moomi lifted my blouse and laid a wrinkled palm on my stomach.

‘Flat as the side of a wall,’ she said. ‘You have had my son between your legs for two more months and still your stomach is flat. Close your thighs to him, I beg you. We all know how he feels about you. If you don’t chase him away, he won’t touch Funmi. If you don’t, he will die childless. I beg you, don’t spoil my life. He is my first son, Yejide. I beg you in the name of God.’