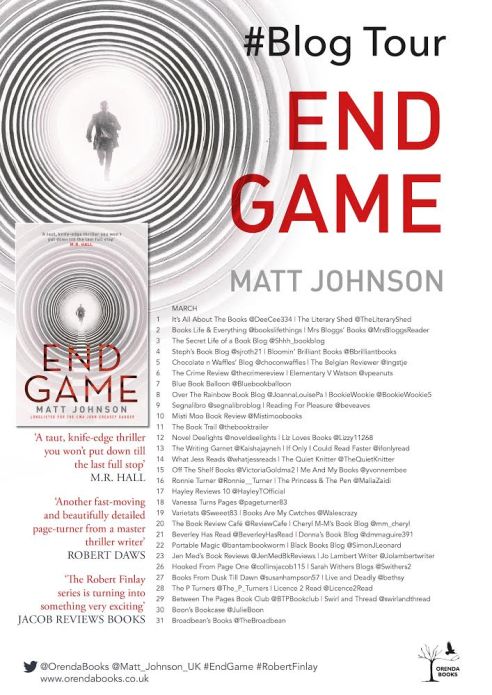 Apologies for my lateness this evening, but I am delighted to welcome Matt Johnson to TWG, as I review his latest release, ‘End Game’ Big thanks to Anne Cater and Orenda Books for the blog tour invite and the ARC of the book. Here is my review: 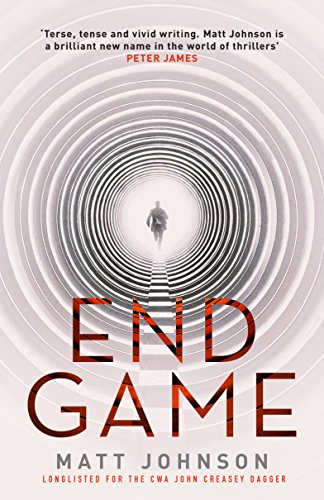 Robert Finlay seems to have finally left his SAS past behind him and is settled into his new career as a detective. But when the girlfriend of his former SAS colleague and close friend Kevin Jones is murdered, it’s clear that Finlay’s troubles are far from over. Jones is arrested for the killing, but soon escapes from jail, and Finlay is held responsible for the breakout.

Suspended from duty and sure he’s being framed too, our hero teams up with MI5 agent Toni Fellowes to find out who’s behind the conspiracy. Their quest soon reveals a plot that goes to the very heart of the UK’s security services. End Game, the final part in the critically acclaimed Robert Finlay trilogy, sees our hero in an intricately plotted and terrifyingly fast-paced race to uncover the truth and escape those who’d sooner have him dead than be exposed.

Anyway, back to the #EndGame! Matt Johnson had me hooked line and sinker from the very beginning! If I didn’t have short nails to begin with, I certainly would have stumps after biting them down due to the intensely crafted storyline.

Whilst the book is incredibly fast paced, it didn’t overwhelm me at all, in fact it did the opposite. I am genuinely surprised that my fingers weren’t covered in paper cuts by the end – I was turning the pages that quickly, just to find out how ‘End Game’ was brought to a conclusion.

What I loved most about Matt Johnson’s novel, was the fact that there was constantly something gritty just waiting for me to sink my teeth into. I was never left waiting for something to happen to one of the characters, or left trying to fill any pregnant pauses by twiddling my thumbs. Honestly, there was none of that. It was as though every nook and cranny of the ‘End Game’ was filled with cleverly crafted tension, edge of the sofa intensity, and characters which didn’t seem to want to leave my head days after finishing this book.

What a brilliant book. If you need a new series to binge, you will not be disappointed with this one, that’s for sure!