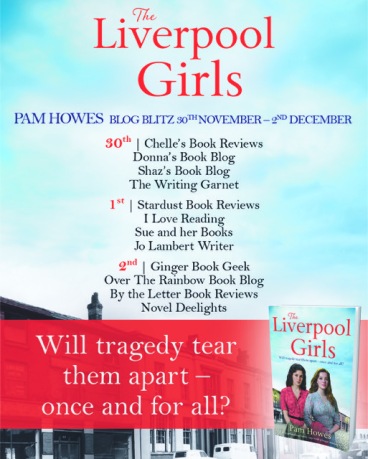 Happy publication day Pam Howes! Whilst today is obviously a day for bookish celebration, it’s also a bittersweet day for readers who have been following Pam’s Liverpool saga series from the beginning. Why? Because, unfortunately, ‘The Liverpool Girls’ is the last book in the series! If, like me, you have read all three books in order, you’ll probably agree that us readers have been on one hell of a ride with each and every character. Some more memorable than others! I am honoured to be one of the blogs kicking off today’s blog blitz with my review. Huge congratulations Pam! 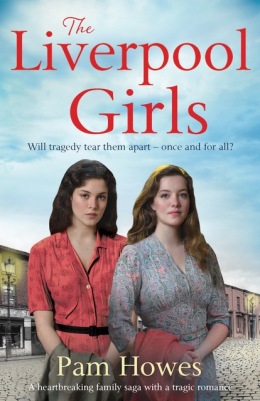 It’s 1966 and in Liverpool two sisters are about to have their lives turned upside down…Sisters Carol and Jackie haven’t had the easiest of childhoods, but as they grow up and begin their own lives both hope for happier times ahead. Stylish Carol works in Lewis’s department store, while Jackie dreams of drama school, and a career on the stage.But the sisters are heartbroken when they discover they have been dating the same man, and an unexpected pregnancy causes a rift between them. Parents Dora and Joe must overcome their past hurts and help their daughters, despite the meddling of Joe’s second wife Ivy.As the sisters’ troubles spiral and difficult decisions must be made, can the family pull together – or will Jackie and Carol’s sisterly bond be destroyed forever?

We are back in Liverpool for the third and final time, as we catch up with Dora and her family in the last instalment of the Liverpool Trilogy. I cannot believe how quick this series has zoomed by, nor can I believe how much all of the characters have grown. Having read the series from book one, it’s been fun watching certain characters grow throughout the years, as if us readers were going through their highs and lows with them at the time. Quite surreal to be honest as some of the characters in this series have lived out their lives before our very eyes.

Dora is our main character once again as we find out what has happened since book two.  Put it this way – A LOT has happened since we left the family and, whilst I’m not surprised that certain situations have come to a head, I really was hoping that I was going to meet Ivy again. But I did. Even though I thought that Ivy’s character was going to rub me up the wrong way yet again, I actually found that another character took that particular crown away from her. Don’t worry though, Ivy was her usual, delightful (ahem) self and still bugged me, yet someone else bugged me even more.

Because I don’t want to give anything away, all I’m going to say is that ONE of Dora’s daughters got my back up on more than one occasion. Once you read the book for yourself, you may think the same, or you may think differently. Who knows! I’m intrigued to see how people fair with this particular character though, I have to say.

In regards to the overall storyline, I really did enjoy catching up with the characters again, but I did find some parts of the storyline to be a little slow burning and lacking in oomph. However, there were parts of the storyline, namely where Carol was concerned, where the pace was on point and the grit made it such an intense read. For me, the story seemed to to and fro between gritty and slow burning, as opposed to Pam Howes’ previous books of being pure intensity. Again, that is just a personal preference.

I am quite sad to see this series come to an end as I would loved to find out what happened to a couple of the characters later down the line. I did thoroughly enjoy the majority of ‘The Liverpool Girls’, especially as the author has made Dora go from strength to strength as a character. Dora really was the star of the show and I really do think that Pam Howes has done a phenomenal job in building her character, whilst also maintaining Dora’s personality across all three books.

Poignant, thought-provoking and definitely memorable, ‘The Liverpool Girls’ is bound to take you on a rollercoaster ride of emotions as you follow Dora and Joe’s life during the late sixties. Full of brilliant history from the sixties, Pam Howes has written yet another touching novel.

Pam Howes was born in Cheshire. She is a retired Interior Designer who began writing seriously in the mid nineties. The idea for her first novel, set in the sixties, was inspired by her time as a teenager, working in a local record store and hanging around with musicians who frequented the business. That first novel evolved into a series set in the fictional town of Pickford, based on her home town of Stockport. Three Steps to Heaven; ‘Til I Kissed You; Always On My Mind; Not Fade Away, and That’ll Be The Day, follow the lives and loves through the decades of fictional Rock’n’Roll band The Raiders. Pam is a big fan of sixties music and it’s this love that compelled her to write the series. A stand-alone true-life romance, Fast Movin’ Train, set in the nineties, was published in early 2012. A new series of Fairground Romances, set in the sixties, begins with Cathy’s Clown, to be followed by Ruby Tuesday early 2016. Pam is mum to three adult daughters, grandma to seven assorted grandchildren, and roadie to one musician partner. She still lives in Cheshire and is currently involved in raising awareness of her home-town’s musical heritage with campaigns to have Blue Plaques erected on the walls of local clubs, The Manor Lounge and The Sinking Ship, where the likes of The Walker Brother’s, The Who and Jimi Hendrix played; now closed, but still firmly in the hearts of Stockport’s recycled teenagers.

Pam recently signed a contract with the award winning publisher Bookouture and the first novel in her new trilogy, The Lost Daughter of Liverpool, will be on sale in February 2017

All books are available in Kindle format, paperback, and Fast Movin’ Train is also available as an audio book.

One thought on “#BlogBlitz! #Review – The Liverpool Girls by Pam Howes (@PamHowes1) @Bookouture”