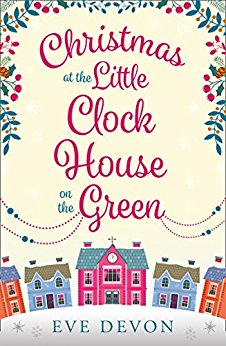 After giving his heart last year only to have it given away the very next day, Jake Knightley is opting out of Christmas—permanently! But then a beautiful new village arrival sets mayhem in motion, upsetting all his carefully laid plans.

Emma Danes has said goodbye to Hollywood and will do anything to help make the clock house a success, even working closely with the tempting Mr Knightley.

Now, as snow starts to fall and romance starts to bloom, Emma and Jake may just find themselves repeating Whispers Wood history beneath the mistletoe…

Having absolutely adored the first book in this series, ‘The Little Clock House on the Green’, it felt like all my Christmases had come at once when I was asked to review Eve Devon’s latest treat. ‘Christmas at the Little Clock House on the Green’ picks up where we left off in the first book, however the focus isn’t solely on Kate and Daniel this time round. Don’t fret though, Kate and Daniel do appear quite a lot in this second book but they have agreed to take a backseat for two new main characters to find their feet.

Emma is an actress. Surrounding herself with the limelight of Hollywood is all she’s ever known (well, aside from working in a bar of course). Kate, her friend back in Whispers Wood, has offered her a once in a lifetime opportunity. Should Emma continue to battle it out in Hollywood for starring roles, or should she take life by the baubles and say yes to Kate?

The other main character is a rather complicated man who goes by the name of Jake. A man who has, unfortunately, lived out an exceptionally popular Christmas song. One day out of the blue, Jake’s personal life went ‘WHAM!’ in his face as his girlfriend at the time decided to have a change of heart. A year later and Jake is only beginning to find his feet as a singleton. Well, until the Hollywood actress appears and he’s left wondering whether this Christmas would be anything like ‘Last Christmas’ when he gave someone his heart, only to have it taken away again..

Eve Devon’s ‘Clock House’ series has got to be one of my all time favourite book serials I have ever read. There is just something so magical about being in Whispers Wood – I would be here all day if I even began to explain exactly what makes it magical, so please trust me on this fact!

Even though ‘Christmas at the Little Clock House on the Green’ manages to give enough background information for those who are beginning the series from book, I would still recommend reading these books in order so that you can appreciate the series one hundred percent.

I have to be honest, I was a little bit apprehensive starting this book as I loved the first book so much and I really wanted the second book to follow suit. I needn’t have worried though, from the very first chapter I was swept away by the magical Whispers Wood and everything it stood for. It was as though I had never been away! As well as the romantic elements to the storyline, this book also continued some truly laugh out loud moments – at one point I even had tears rolling down my cheeks I was laughing that much! The entire storyline was extremely well thought out, making every eventuality appear flawless.

I loved how we were able to see a different side to both Kate, and Daniel now that they had taken a step back. It was as though Kate had found herself and, after the previous book, it was so lovely to see things working out for her. Of course, Bea’s memory lived on in book two and it was still as emotional as the first book, I had tears in my eyes once again for a completely different reason.

‘Christmas at the Little Clock House on the Green’ took my breath away and left me wanting even more. Closing the book after yet another visit to Whispers Wood left me feeling incredibly deflated as I just didn’t want to say goodbye. All of the characters in this book got under my skin one way or another (in a good way) and, as daft as this sounds, I feel as though they have become great friends (albeit fictional) as I have gotten to know them through their worst moments, and their best moments.

Eve Devon truly has captured the true essence of Whispers Wood in such a beautiful and seamless manner, warming my heart from the very first page until the very last. I laughed, I cried, but despite that, my heart was filled with so much joy thanks to this outstanding novel from the extremely talented, Eve Devon.

It’s pretty clear that the author has written this book from the heart and to be honest, I wouldn’t expect anything less from this author. I cannot wait to read Eve Devon’s next book as if it’s anything like the previous two, we will all be in for an absolute treat.

Heart-warming, joyous, magical and sheer perfection, ‘Christmas at the Little Clock House on the Green’ is THE book to read these Christmas without a doubt.
Absolutely outstanding!

P.S. Gertrude needs a story of her own…SHE is a belter of a character!!!!