Huge thanks to Sarah from BloodHoundBooks for inviting me to take part in the blog blitz for ‘Scream Blue Murder’. I am delighted to be able to share my review with you all this evening. 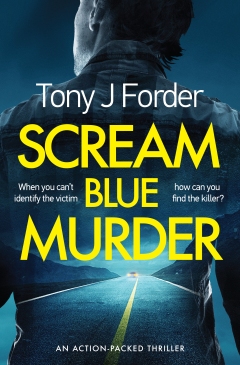 Mike Lynch is going through hard times. But things get much worse when he witnesses a murder in a lay-by. Snatching the victim’s car in order to get away, Mike soon makes a shocking discovery – the victim’s young daughter and her nanny are hiding in the rear footwell. This is when the real trouble begins.

Mike wants to go to the police, but the nanny, Melissa, wants to delay until the daughter, Charlie, is somewhere safe. Mike agrees to this request before finding out the seriousness of the situation, and just how much danger they are really in.

In a situation where nothing is what it seems, Mike will have to fight for his life to protect a woman and a child he doesn’t know. And when the death count rises, he will discover what kind of man he really is.

Oh.my.god!!! What a book! The idiot that I am forgot to write this blitz in my diary which, thanks to the publishers incredible organisational skills, I was prompted on social media last night. Cue having my nose in ‘Scream Blue Murder’ all of last night. Am I complaining though? Am I heck! Whether I am a fast reader or not is irrelevant as I just could not put this book down, therefore I was speeding through it like goodness knows what!

The story begins with a teaser prologue – it certainly kept me guessing that’s for sure! Between that and the end of the first chapter, it felt as though I had a constant frown on my face. It seemed like such a big jump between the prologue and the ‘now’, I honestly thought I had missed a few pages!

I kept turning the pages thinking ‘what the hell is going on?’. Even though I couldn’t seem to work out what was happening, what the motive was, who exactly was in the firing line even though there were people after Lynch, I was 110% engrossed in the intensity of the storyline. The jam-packed, high intensity storyline kept me on the edge of my seat whilst also managing to fray my nerves. Clueless yet completely addicted.

About 60 or so percent in, the storyline cranked up yet another notch. Something was about to go down with Lynch and Melissa, but what, I had no idea. The author described certain goings on around and due to the way in which the author fed those descriptions to his readers, my heart rate shot up in anticipation. I have no idea why I was feeling apprehensive as I wasn’t even in the firing line yet the author made me feel as though I was slap bang in the centre of all the action! Genius!

From that moment, whenever I had to go outside to let my dog out for a tinkle, I began jumping at the slightest noise. Looking left and right in the garden to make sure that there was nobody about to shoot me. Yes, you may laugh as whilst it is hilarious now, I forgot to switch off from the book before I went outside so as far as I was concerned, any movement I made was still part of the storyline. If that makes any sense at all!

‘Scream Blue Murder’ kept me in suspense until the very last page. I’m not going to lie, I had my suspicions about several of the characters involved in the book as there had to be a lot more to the story. It was clear that someone was lying but I couldn’t for definite say who. I had a hunch who it might be and due to the risk of spoilers I shan’t tell you who I thought it might be, but oh my gosh!

A fantastic, well written, suspenseful and spine tingling novel, which left me finishing the book with my hand over my mouth in shock. Absolutely brilliant.

Tony J Forder is the author of the critically acclaimed crime thriller Bad to the Bone, the first in a series featuring DI Jimmy Bliss and DC Penny Chandler. The second book in the series will be released in 2018, with a third currently in progress.

On 19 September 2017, Tony’s dark, psychological crime thriller, Degrees of Darkness, featuring ex-detective Frank Rogers, was also published by Bloodhound Books. This was intended to be a stand-alone novel, but Tony is now considering the possibility of a follow-up.

On 8 November, Bloodhound Books will publish Tony’s new fast-paced action thriller, Scream Blue Murder. This is the first novel in an intended series, and has received praise from both Mason Cross and Matt Hilton.

Some years ago, Tony won a short story competition judged by an editor from Pan Books. The story, Gino’s Bar and Grille, went on to be published in Dark Voices 2, part of the celebrated Pan Book of Horror series. Three further short story sales followed: Book End, published in Dark Voices 4, Character Role, in FEAR magazine, and finally A Grim Story, which featured in A Rattler’s Tale. It was the start of Tony’s publishing journey.

Tony is signed to Bloodhound Books for a minimum of four books, but believes there is much more to come.