I am delighted to be closing Tess Gerritsen’s blog tour with my review of her new book, ‘I Know a Secret’. Big thanks to Alison Barrow from Transworld Books for the ARC, and thank you to Anne Cater for inviting me to be part of the blog tour! 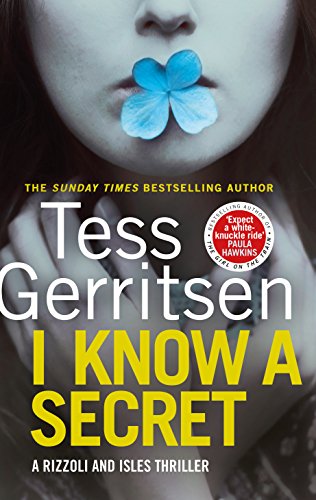 I have a secret.
And someone wants to make sure I never tell . . .

In a house decorated with horror movie posters, a young woman’s body is found. She lies on her bed, two bloodied objects clutched in her palm. Detective Jane Rizzoli and Forensic Pathologist Maura Isles are called to the murder scene, but even faced with this gruesome sight they are unable to identify the immediate cause of death.

Their investigation leads them to a high-profile murder case that was seemingly solved years before. But when another body is found in horrific circumstances, the link between the two victims is clear. Was the wrong person sent to prison? Is the real killer out there right now, picking off new targets?

One woman knows the killer is coming for her next. She’s the only one who can help Rizzoli and Isles catch him.

Before I go any further, I need to admit something. I had never, ever read a Tess Gerritsen novel before I read this one. I know what you’re thinking, it’s shameful. I keep asking myself why I haven’t picked up one of her books before now, yet I still haven’t managed to come up with a decent answer. I have absolutely no idea why I haven’t.

Would I pick up another Tess Gerritsen novel in the future?

What more can I say? As soon as I spotted the cover of ‘I Know a Secret’ on Twitter I just knew that I had to read it. I was intrigued. Severely intrigued. Did I start the book with any expectations? For once, no I didn’t because as Tess Gerritsen was a new author for me, I had no idea what her writing style would be like, or how she would manage to capture her reader’s attention. Before I began this book I had one hope – to enjoy it.

We have all had to keep a secret at some point in our lives, whether it was one of our own, or whether it was someone else’s secret. However, what we don’t stop to consider are the consequences keeping said secrets can uncover. Those secrets may rip people’s lives apart, create divorces, lose lives, lose trust, and may even save your own life. In ‘I Know a Secret’, author Tess Gerritsen uses secretive notions as the underlying content for her storyline (as well as crime obviously), where secrets are put into the spotlight and eyes are opened (or closed) when those secrets are on the path to be discovered.

A young woman is dead. The only message she can relay to Detective Jane Rizzoli, and Forensic Pathologist Maura Isles, is via the two bloodied and shocking objects in her hands. Cause of death? Currently unknown, however with past investigations coming back under the spotlight, the cause of death will be found…eventually. Well, once the cause of death of the second victim has begun to be investigated. Secret? What secret?

Beads of sweat on forehead? Check.
Heart rate above normal? Check.
Dangling off the edge of the sofa without caring? Check.
Nausea? Check.
A sense of urgency in finishing the book? Double check.
Jumping out of your skin every time your hear a noise, even if it’s the dog snoring? Triple check.

FYI – I think I have fallen in love with forensic storylines. That sounds quite odd on the outside of my mind, but I’m sure you know what I mean! Anyway, what a heart-in-mouth book this was!! I have never read anything like it! The storyline was incredibly rocky with nothing 100% guaranteed. I stopped trying to guess the outcome and the routes the characters took – it was far simpler to sit back and enjoy (whilst being rather on edge) Tess Gerritsen’s novel.

I’m no expert on forensics or anything medical related, but the way the author wrote particular scenes involving such intricate levels of detail, completely blew me away. It was like I was hanging off of every word she wrote. So much so, I reckon the author could write anything and I would believe it. She has THAT kind of writing style. I’m not saying what she wrote wasn’t factually sound by the way, I’m just saying I would believe every single thing she wrote because she wrote it in such a cut throat kind of way – absolutely brilliant FYI.

To say I am impressed with Tess Gerritsen’s story telling would be a severe understatement. The author managed to pull me in and keep my attention for the entire duration of the novel, whilst peaking my excitement with every turn of the page.

Seeing is believing where ‘I Know a Secret’ is concerned, but I’ll tell you something – to miss out on such an intense, mind-blowing, highly eventful and brilliant written novel, would be an absolute travesty. Period.

One thought on “#BlogTour! #Review – I Know a Secret by @TessGerritsen @TransworldBooks @annecater”